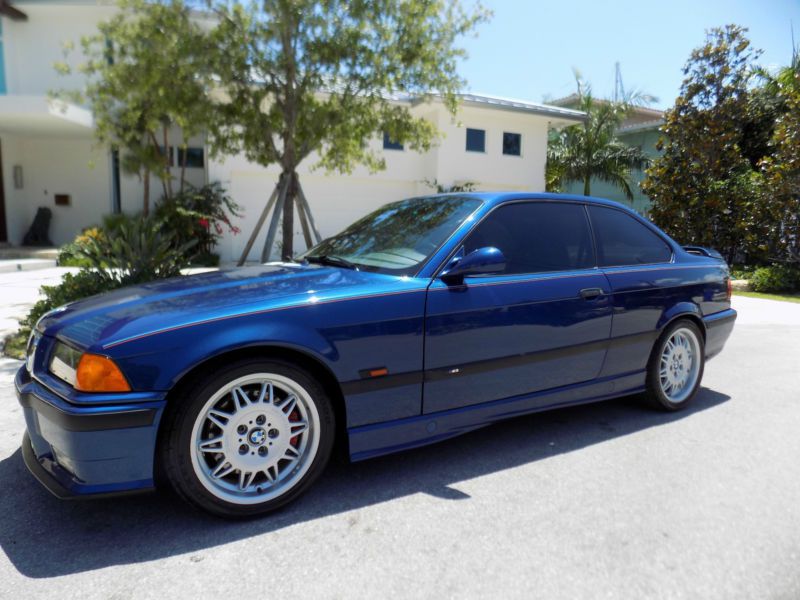 Send me an email at: rennareeychaner@uk8.net .

3.0-liter six-cylinder engine
Manual transmission
Rear-wheel drive
Reportedly one of 30 made in October 1995
One of 13 2-doors and only one with manualThe BMW M3 has started a legacy that has yet to end over the past 30 years. When the E30 M3 was launched in 1985 it
was done so to keep BMW current and competitive with Mercedes-Benz who had just released the 190E 2.3-16 Cosworth.
As it made its way on the track in Touring Car Championships around the globe, it soon became a real contender and
the benchmark for BMW Performance. The M3 has won at world-renowned races such as the 24 Hours of Nurburgring,
World Touring Car Championship Driver’s Title in 1987, and countless wins across the globe on both tarmac
circuits and rally settings.
By 1988 BMW finally started delivering “U.S. spec” examples of the M3 to North America, both factory and
privateer teams immediately put them to work on the track. A small enthusiast’s base was quickly growing for the
new M Car, and would ultimately prove to be a love affair with the brand and the basis for BMW to keep making more
units and further improving their technology.
This 3.0-liter six-cylinder engine is an elegant work of machinery. It is meshed with a manual transmission, and is
also equipped with power steering and brakes. This vehicle also has power windows, air conditioning, radio and a
sunroof. This stunning M3 is reportedly one of only 30 total M3s that were made in October 1995. Of those, the M
Owners' Registry shows only 13 had two doors and only one with five-speed manual transmission the owner reports.
The interior is unique to the cars made that month and the interior on this example is in very fine condition.
Research shows that this was the last year of the non-governed speed limiters, and only 500 were made in 1995.
The driving experience of this M 3 is exhilarating The car has monster power and loves to just keep going. It
shifts through the 5 speeds flawlessly. New tires were just installed on factory 17 ' BMW Motorsport wheels. Cross
drilled rotors make the car stop on a dime. Red calipers finish off the look of this amazing Coupe.
This BMW is painted in Avus Blue and is in Excellent condition and shines very well. its contrasted with a Light
grey interior, both of which are in excellent condition.A new headliner was just installed to complete the
interiors beauty. The engine compartment and floors are toothbrush clean, a clear indication of its pampered
ownership. Included with the car is the original radio , tools .
The auto check shows mileage issues from being handled by several dealers and the mileage was put in wrong at time
of transfer. The car shows 43 k miles and looks it . But i have no way to verify. I am selling the car as miles
exempt. Its a very nice and straight car and very clean top to bottom

BMW i8 will be first production car to use Gorilla Glass

What do smartphones and the BMW i8 have in common? Glass. Scratch-resistant Gorilla Glass, that is. The i8 will be the first production car to use the chemically hardened material, which is more durable, lighter and provides more sound deadening than conventional laminated automotive glass. We thought it would be a natural replacement for windshields, but, according to Autoweek, BMW said it will be used for the rear window for sound deadening purposes. The Gorilla Glass will still be laminated, with two 0.7mm thick layers of it sandwiching an acoustic sheet, reports Autoevolution.
BMW reportedly claims the i8 will weigh less than 3,285 pounds, and to offset the heavy hybrid powertrain to reach that goal the automaker has implemented lightweight materials normally not found in mass-production automobiles. With a carbon fiber reinforced plastic (CFRP) monocoque used for both the (relatively) pedestrian i3 and the upscale i8, it's not surprising BMW was also the first to jump onto Gorilla Glass, especially given the timing of a report that a high-end automaker would introduce it within the year.
Be sure to check out our First Drive review of the i8 to see if BMW's newest sports car is living up to the hype.