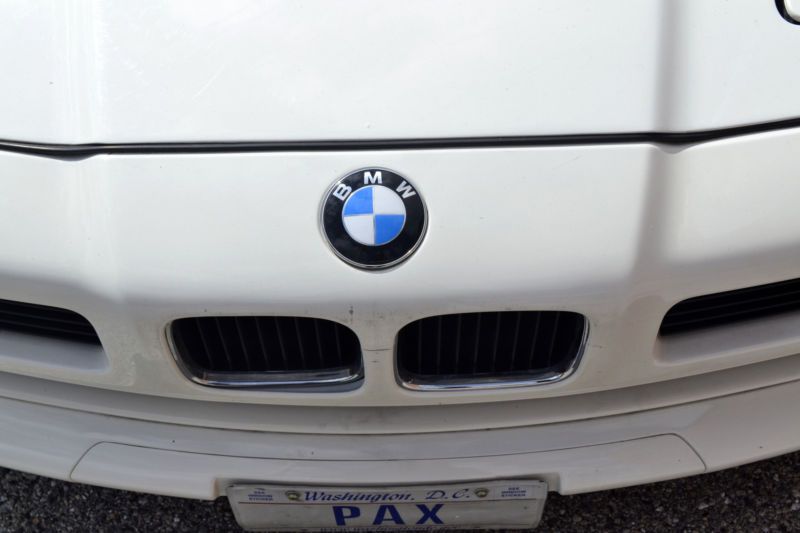 If you have any questions feel free to email me at: chanellecsschweinberg@f1fans.net .

THIS IS A FACTORY ORIGINAL V-12 1991 BMW 850i IN ALPINE WHITE AND TAN LEATHER SEATS, CARPETS AND GENUINE SUEDE
LEATHER HEADLINER. FOR A 24 YEAR OLD CAR, THE OPTIONS ON THIS CAR ARE INCREDIBLE INCLUDING: ELECTRIC POWER SEATS
AND WINDOWS, POWER MIRRORS WITH TILTING PASSENGER SIDE MIRROR WHEN PUT INTO REVERSE, CENTRAL LOCK, CRUISE CONTROL,
ELECTRIC SUNROOF, COMPUTER SYSTEM THAT ALERTS YOU IF THERE IS ANY ISSUE WITH THE CAR INCLUDING LOW RADIATOR
COOLANT, LOW WINDSHIELD WIPER LIQUID, LOW ENGINE OIL LEVEL ETC...
THE CAR HAS UNIQUE POP-UP HEADLIGHTS, AUTO CLOSING WINDOWS AND SUNROOF, AND MANY OTHER LUXURY OPTIONS.
SINCE I'VE OWNED THIS CAR IN 2006, I'VE REPLACED THE ENTIRE TRANSMISSION SYSTEM, THE SUSPENSION SYSTEM (INCLUDING
INSTALLING HEAVY DUTY BILSTEIN SHOCKS AND STRUTS), THE AC COMPRESSOR, THE FUEL INJECTION SYSTEM (INCLUDING FUEL
PUMP, FUEL LINES, OXYGEN SENSOR), AS WELL AS REPLACING UPPER AND LOWER CONTROL ARMS, EXHAUST, THE RADIATOR AND FAN
CLUTCH, WATER PUMP AND THERMOSTAT AMONG MANY OTHER PARTS. I HAVE MOST OF THE RECORDS AND THEY CONVEY WITH THE CAR.
I HAVE RECENTLY REPLACED THE TWO BATTERIES AND THE MICHELIN TIRES HAVE LESS THAN 5K MILES ON THEM. THE ONLY STOCK
PART I'VE REPLACED WITH
THIS HAS BEEN MY WEEKEND DRIVER SINCE PURCHASING THE CAR. THOSE WHO HAVE EVER DRIVEN THIS CAR KNOW HOW IT TURNS
HEADS EVERYWHERE YOU GO, WITH PEOPLE SOMETIMES ASKING IF THIS IS A NEW MODEL JUST INTRODUCED BY BMW!! THIS IS A
TESTAMENT TO THE UNIQUE TIMELESS DESIGN THAT DOES NOT SEEM TO AGE. THE SMOOTH BUT POWERFUL V12 ENGINE MAKES THE
2-TON CAR FEEL FEATHER LIGHT WITH EFFORTLESS ACCELERATION. THIS BMW 850I IS READY TO BE DRIVEN!
DESPITE THE ABOVE, AND MY CONFIDENCE IN THE SOUND MECHANICAL STATE OF THE CAR, I AM NOT OFFERING ANY WARRANTY IN
THIS LISTING, AND THE CAR IS OFFERED FOR SALE "AS IS" IN VIEW OF THE FACT THAT THIS IS A VINTAGE CLASSIC CAR.
YOU'RE MOST WELCOME TO ORDER A MECHANIC TO INSPECT THE CAR BEFORE PURCHASE, OR IF YOU WOULD LIKE TO TEST DRIVE IT
YOURSELF. THE CAR IS CURRENTLY LOCATED IN THE STATE OF MARYLAND, WHERE I HAVE RECENTLY MOVED FROM WASHINGTON DC