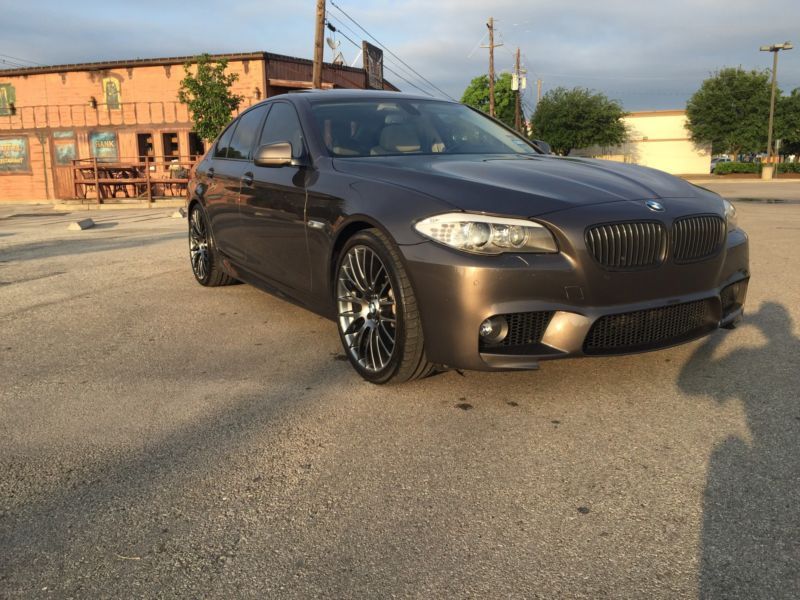 1.   SPORT PACKAGE: POWER WINDOWS AND BUCKET SEATS, REAR VIEW CAMERA, BUMPERS
SENSORS,  BLUE TOOTH,  SPORT STERRING WHEEL WITH PEDAL SHIFTER , NAVIGATION,
USP ABLE AND LOGIC 7 MUSIC SYSTEM AND MANY MORE
2. CONFORT ACCESS PACKAGE: LOCK CAR ON THUMB , PUSH START BOTTON, GOST LIGHT
WITH BMW LOGO WHEN OPEN THE DOORS , REAR WINDOWS SUNSHADE AND MANY MORE
3. MOON ROOF , BI-XENON ADAPTIVE HEADLIGHTS, REAR SPOILER AND BRAND NEW PIRELLI
21" RUN FLAT TIRES.
4.LOADED LOADED LOADED EXCELLENT CONDITION!!!!!!!RECENT SERVICE , NEW PIRELLI 21
REAR TIRES RUN FLAT AND BRAKE JOB
CAR HAD A RECENT SERVICE.  IT RUNS AND DRIVES FLAWLESS AND I
DECIDED TO SELL IT DUE TO OBTAINING ANOTHER SUV DUE TO EXPECTING ONE MORE
BABY.  IT IS A SPORTY BEAUTIFUL CAR, WITH LOTS OF PERFORMANCE AND EXCELLENT
CONDITION NOT TO MENTION THAT IT LOOKED LIKE AN M5.  AGAIN TWO AND HALF YEARS
AGO CAR WAS INSPECTED FROM UNDERNEATH THE HOOD, CARPET, DOOR PANEL, AND
ALL WIRING WERE INTACT WITH NO SIGN OF ANY WATER AND I HAVE BEEN DRIVING IT
SINCE THEN WITH NO PROBLEM AND IT WAS MY DAILY DRIVER.   IT IS SOUND IN EVERY
ASPECT NO PROBLEM WHATSOEVER.
EXTERIOR: GLOWS WITH NO DINGS NOR SCRATCHES YET FEW BLEMISHES NOT WORTH
MENTIONING ON RIGHT QUATER PANEL HAS BEEN TOUCH UP.
INTERIOR: LIKE NEW NO SIGN OF WEAR AND TEAR
ANY PROBLEM: NONE WHATSOEVER MINT CONDITION
ELECTRICAL: EVERYTHING WORKS PERFECTLY
OPTIONS: LOADED WITHOUT NAVIGATION SPORTS WHEELS, LEATHER, WITH SPORT STERRING
WHEEL AND SHIFTING PEDALS
INSPECTION: INSPECT IT BY ANYONE EVEN BY BMW DEALER
CAR IS SOUND AND RUNS AND DRIVES PERFECT LOOKS LIKE NEW EXTREMELY WELL
MAINTAINED.

BMW is looking to stave off electric vehicle range anxiety with a new program that offers buyers a free gasoline loaner with every i3 purchase. Ward's Auto reports BMW is confident that the EV will give buyers the kind of transportation they need for 90 percent of their trips. The loaners, meanwhile, will be available for those few occasions when drivers need to cover more ground than the machine's batteries will allow. The i3 gets around with help from a 180-horsepower electric motor paired with a lithium-ion battery pack.
The combo is good for trips of between 80 and 100 miles depending on driving habits and weather conditions, though BMW also plans to offer a model with a small two-cylinder range-extending gasoline engine as well. That option will likely set you back an additional $4,000. When the machine bows in 2014, it will likely come with a charge time of four to six hours when suckling from a 220-volt outlet.
As far as the conventionally powered loaner car goes, the cost of the program is included in the i3's purchase price, though BMW has yet to figure out how many free loans will be offered, or what happens after that threshold is reached.