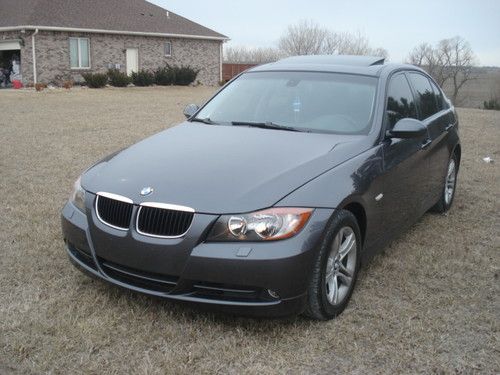 I have a gorgeous looking 2008 BMW 328XI for sale with 53,000 original  miles,  it is dark gray in color, black leather interior, heated seats, cruise control, all power , moon-roof, sunroof, cd player, aux and usb drive , ALL- WHEEL DRIVE, 3.0 V6 engine, the car is in really good condition really taken care of never beeen smoked in. Tires are about 40%. It comes with a Nebraska  Previous Salvage Title i purchased it with minor front end damage from a insurance company i had to replace passenger side fender, hood, bumper cover and passenger side headlight all original parts were put on.  there wasnt any frame damage it was a run and drive vehicle when i purchased it,All airbags are original none of them deployed. Drives really nice and smooth alignment was done by bmw of lincoln , Everything was fixed at a professional body shop,Had the dealership inspect the car after being repaired and everything has passed. I purchased it when it had 48,000 miles and havent had any problems .You can have this car inspected at your own cost if you prefer,

Car will have a full detail job exterior interior before pickup
I require a $500.00 dollar deposit within 48 hours after the auction is over.
You can call/text me at  (402)310-7932 for further questions Thank you.

Just in case anyone was wondering how plug-in BMW cars would be received, the answer is apparently "quite well." After speaking with BMW's global sales chief last week at the LA Auto Show, Reuters has learned that the plug-in hybrid i8 sports coupe is already sold out for its first year on the market.
There is no word as to how many i8s BMW sold, but the first example was delivered to a customer last week in Germany. As for the all-electric/range-extended i3 hatchback, the automaker has received more than 10,000 orders for this model before it even goes on sale. Likewise, we don't know how many BMW plans to sell, but we do know they'll be showing up in the US before next summer.
We've already spent some time behind the wheel of both plug-in BMWs, and you can check out our first drive of the production i3 and our first drive of an i8 prototype.