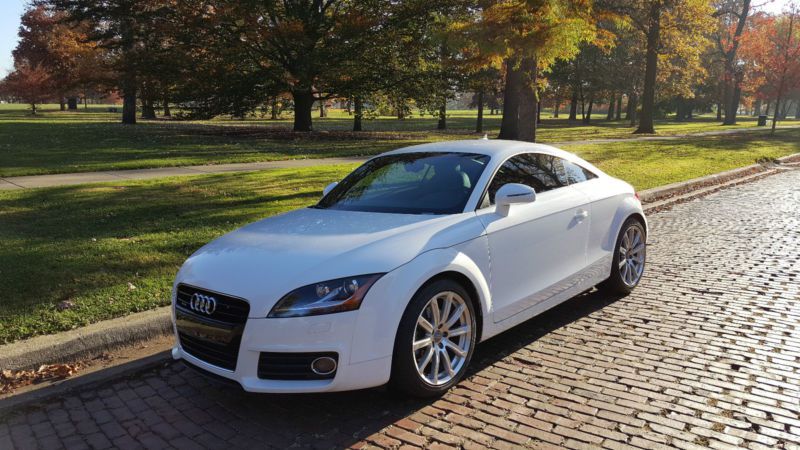 For 2013, the Audi TT is offered in both a coupe and roadster body style, both of which are built on Audi's improved aluminum space frame chassis, which consists of 69% aluminum, making it both lightweight and incredibly stiff. Audi's signature quattro all-wheel-drive system is the only drivetrain available across the lineup. In addition, Audi's S-Tronic 6-speed dual-clutch automatic transmission is the only available gearbox on the TT and the TTS.Both the TT and upscale TTS feature a healthy array of standard equipment, including an "Audi Concert" audio system, a driver information system and an automatic climate control system in the coupe.Optional 'xenon plus' headlamps are available with cornering technology and both the TT and TTS are available with Audi's S-line competition package, consisting of special design touches to the bumpers, air inlets and rear diffuser, special interior detailing, a rear wing, unique 18-inch wheels and a 10-mm lower ride height. Optional magnetic ride shocks can be switched between "normal" and "sport" modes and a sport button modifies steering boost and exhaust sound. Optional napa leather gains a new thermal resistance treatment that cuts down on seat temperature significantly when left in the sun. A high-performance model was introduced for 2012, called the RS. It features a 360-horsepower 5-cylinder engine mated to a 6-speed manual, the only transmission option. This combination is enough to scoot the TT to 60 mph in under 5 seconds. Audi's magnetic ride suspension, 19-inch alloy wheels, xenon HID headlamps and silk napa leather upholstery are all standard. The RS version of the TT represents the ultimate evolution of the car.

Audi A8 facelift on the way

The coming Audi A8 has already been spotted in camouflage on public roads at earthly elevations, and now our snappers have caught it at elevation in the Alps. The evolution will entail modified head- and taillights, different sculpting for the grille and a new bumper profile said to be more in line with the A6 S Line.
Inside, there might also be adjustments made to input controls like the gesture touchpad and the MMI infotainment system that include behind-the-scenes improvements like new Nvidia Tegra chips, but such revisions are expected to be minor. With the S8 and the TDI just having been launched, don't be surprised if engine outputs also remain the same. The prevailing sneaking suspicion is that we'll see the car unveiled at this year's Frankfurt Motor Show.

2015 Audi A3 configurator is up and running

Potential customers for the new Audi A3 should set aside some time during their lunch breaks to head over and build their ideal example of the new sedan. The official configurator, complete with pricing and options, has gone live on the Audi website.
Customers can choose from three trim levels (Premium, Premium Plus and Prestige), while each trim can be had with either the Volkswagen Group's familiar 2.0-liter, turbocharged, 220-horsepower four-cylinder or a 1.8-liter, turbocharged, 170-horsepower four-cylinder. Buyers of the 2.0-liter will enjoy Quattro all-wheel drive while power for the 1.8T is channeled through the front wheels only. A six-speed, S-Tronic dual-clutch transmission is standard across the range.
You can check out full pricing on the A3 right here, but as a means of recap, the base Premium trim with the 1.8-liter engine starts at $29,900. A Premium Plus 1.8T starts $32,800 and the Prestige 1.8T will cost $38,700. Adding a 2.0-liter turbo and Quattro increases the price by $3,000, regardless of trim. Those prices don't include an $895 destination charge.