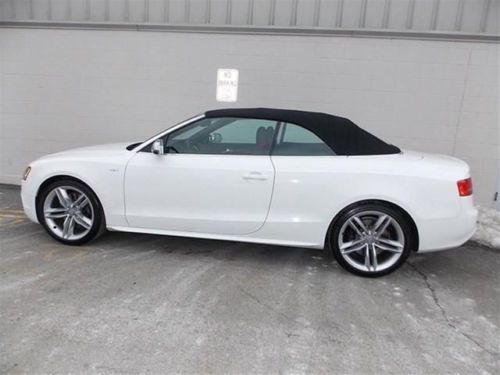 There's little doubt that the new Audi TTS and its 310-horsepower, 2.0-liter, turbocharged four-cylinder will be very quick when released to the general public. As a means of reminding us that Audi can do much more with the little TT, though, the German manufacturer has presented this, the TT Quattro Sport Concept, alongside its litter of new sports cars.
Complete with a 420-horsepower, 2.0-liter, turbocharged engine - yes, it really puts out 210 horsepower per liter - the TT Quattro Sport can snap to 62 miles per hour in just 3.7 seconds. 331 pound-feet of torque is also on offer, meaning this one-off TT outguns the TTS by 110 horsepower and 51 pound-feet of torque.
An S-Tronic transmission shuffles the power about, while the car itself rides on a lowered and stiffened suspension. 20-inch alloys are featured with centrally locking, racing-style hubs. Those racy wheels are housed in wells that have had their arches stretched an additional 1.18 inches, which, along with the lowered suspension, contribute to the TT's aggressive looks.

Audi A6 gets styling, powertrain tweaks

The Audi A6 is already a fairly handsome, German luxury sedan, but the whole range is receiving some styling updates in Europe this fall. Audi's US arm would not directly confirm which of these updates will be coming to America, instead just telling us that an updated A6 will be coming next year.
On the outside, the tweaks are fairly minor. The company's single-frame grille, which shows up throughout the model lineup, gets some very subtle styling changes, and the lower bumper and its air intakes are also reshaped. More obviously, the headlights have a new form with the LED running lights cutting through them in roughly the shape of a T, as opposed to outlining them, as before. A similar shape is also used for the updated taillights, and there are now rectangular exhaust outlets around back, as well. In profile, the side sills also get a harder crease toward the rear of the sedan.
Inside, things are kept generally the same, as well. There's a new Flint Gray interior color for the A6 and Salsa Red for the S6. But the biggest change is a power-retracting eight-inch infotainment system using the Nvidia Tegra 30 graphics chip. The optional night vision assist system is also improved with new functions, according to Audi.