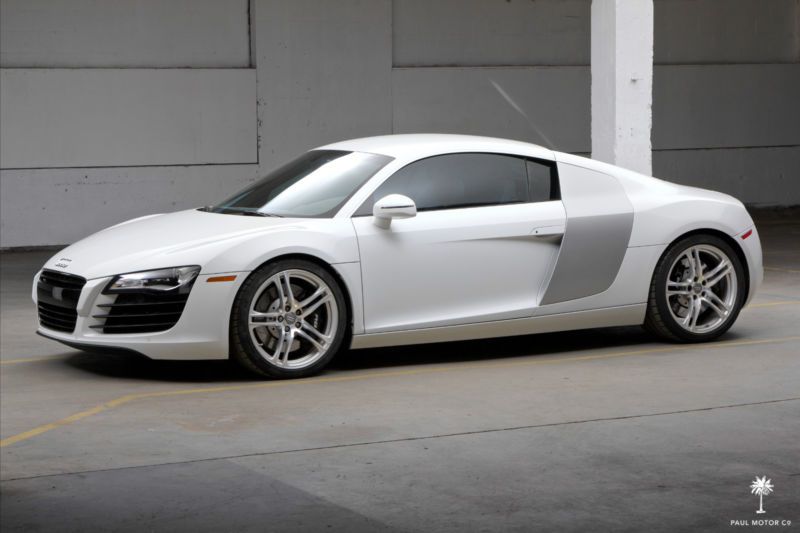 2008 Audi R8 4.2 - 1 Owner / 13,358 miles / 6-Speed Manual
This 2008 Audi R8 4.2 features an Ibis White exterior paint with an Oxygen side blade (bright silver) and a
Limestone Gray interior. The vehicle has a 6-speed manual transmission and many factory options which include: a
navigation system, a Bang & Olufsen sound system, the fine Nappa leather package, power seats, heated seats,
parking sensors, sport suspension, bluetooth and more.
This is a 1 owner, Canadian vehicle with an impeccable CarFax report and no accidents. It has been extremely
well-maintained and always driven with care. Both aesthetically and mechanically, the car looks and feels like
it’s in fantastic shape. Comes with an Audi car cover.

For the last few years, Audi has been publicly toying with building a successor to its Ur-Quattro, a model still glowing in a gritty patina of motorsports glory decades after it left the scene. If anything, the rally car's halo has burned brighter as Audi has matured into a world luxury superpower. Since 2010, the German automaker has shown two different concept cars that attempted to re-bottle the legend's lightning, and it's still trying to figure out whether to market a production model. Despite that conundrum (and not to take anything away from the seminal Ur-Quattro), it's easy to argue that there are two other cars much more important to Audi's rise from its '80s ashes: the original TT and the B5-generation A4 and its high-performance variants.
The TT thrust Audi into the vanguard of automotive styling while firmly establishing the Volkswagen Group as masters of platform development (the same basic architecture and powertrain guts were employed in a dizzying array of models, from the Golf, Jetta and New Beetle to a number of Škoda products). This unprecedented, flexible building-block approach to new model development has since become the standard of the industry.
In the case of its B5 cars, the A4, S4 and RS4 put Audi back on the radar of rival German automakers, and more importantly, they grew the Four Rings' sales by leaps and bounds while reminding the world that all-wheel drive needn't only benefit hardcore performance cars and utility vehicles. Fast-forward to today, and the A4 has established itself as the bedrock of Audi's lineup, but it's also grown over its four generations to become substantially larger, heavier and costlier than the model that debuted back in 1996 America. That's created a vacuum at the bottom of the range that the company has inadequately addressed - until now.