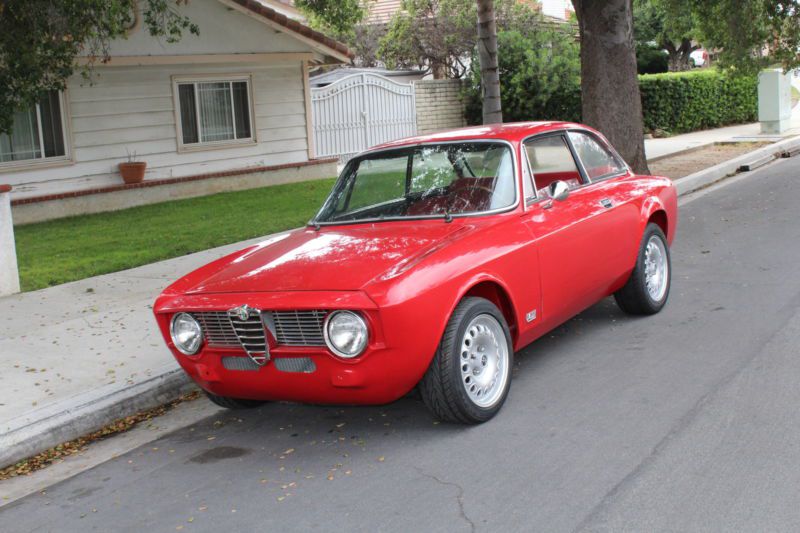 1967 Alfa Romeo GTV Stepnose
This is a GTA Style 1967 Alfa Romeo GTV Stepnose. From 1965-68 there were only a little over 14,000 Stepnose's
produced. This is a rare car to find and they're becoming even more difficult to find over the years.
Mechanically (most of the parts are new)
- Engine - Drives Great - Reconditioned 2000 CC with 10 miles driven on it - High Performance with a custom
cylinder head, port and polished, big valves, special cams, new 40 Webers and New air filters
- Transmission - Reconditioned 2 Liter
- Suspension Upgraded to 2000CC, included with a limited slip differential, 2 Front upper ball joint arms are the
adjustable type
- Flywheel was made to fit the 1600 Bellhousing, balanced, with a new clutch and TO bearings
- High Performance Springs
- 4 New Gas Shocks
- Racing Type Front Brake Rotors
Body Condition
- Body is straight and in an excellent condition with zero rust
- Stripped to the metal and redone with a high quality finish (just to prepare the body it cost $17,000)
- Repainted to Candy Apple Red (3 months ago - $5,500)
- Rear Wheel Arch has been enlarged a little with metal, not fiber glass
- New Custom Aluminum Gas Tank (there's room to still fit the spare tire in the trunk as well)
- Under Carriage has been repainted, high quality, with no undercoat
- Floor is solid
- Rocker panels are solid
- New Front Windshield (all gaskets are new as well)
- All chrome is in a good condition
- New Front Grill
- New Stainless Steel performance straight flow exhaust system from Alfaholics (from the center to the back)
- New European Tail Light Lense assembly
- I'm also including a used rear original bumper and used front European bumper with the parking light on the top
all polished and good cond and new stering column COST$500
Interior
- Insulated the door panels and Flooring before the Panels and carpets were installed
- New wool carpet
- New Door Panels
- New Window Latches
- New Rear View Mirror
- New Headliner
- Top of the dash has been reconditioned
- Seats came off a 1965 GTV - they're more comfortable and bigger than the 67 GTV Seats
- All the seats, front and rear, were redone in red leather (a few years ago)
-
Rims and Tires
- New 15 x 7 GTA Rims
- New 50 Series Tires, 205 on the rear and 195 in the front
Tools and Owners Manual
- They both come with the car
- Tools are not original, but similar to what you find in the original tool kit