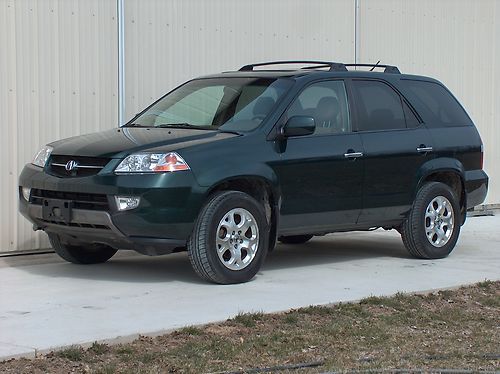 Condition: Used: A vehicle is considered used if it has been registered and issued a title. Used vehicles have had at least one previous owner. The condition of the exterior, interior and engine can vary depending on the vehicle's history. See the seller's listing for full details and description of any imperfections. ...
2001 Acura MDX Touring - My wife used this car to do errands and go to the grocery. Why would any one use an SUV to go to the grocery you ask? You haven't seen my wife power shop!! These are great SUV's. Very roomer inside, good gas mileage and great in the snow. It gets between 20 and 25 miles per gallon, depends on how you drive. I would give the exterior of the car a 7 and the interior an 8.5. I would have rated the exterior an 8 but there's a small door ding on the passenger door. I tried to photograph it, it didn't show in the pictures. It can easily be removed, it didn't damage the paint. I do all my own maintenance. The car is 100% mechanically; you could easily drive it another 100,000 miles without any problems. Here's a list of what I've done in the past 6 months.
Replaced:
Oil and filter
Transmission fluid
Rear end grease
Spark plugs
Brake fluid
Coolant
Cleaned air filter
Just a note, I replaced the timing belt, tensioner, water pump, battery and drive belts at 105k mile. It has a K&N air filter, it gets another 2 or 3 miles per gallon, it's washable so you don't have to buy replacements. Adult driven, car has always been garaged. I only use Honda products.
We're getting rid of it and buying a truck.
- Local pickup only.