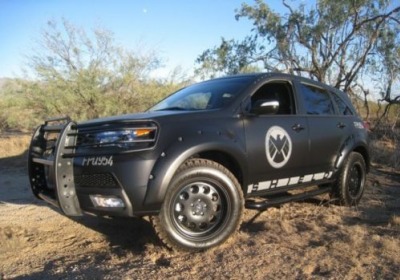 Planning to dress up as Agent Coulson for Halloween next year? We've got the perfect accessory to complete your Level 7 costume. On eBay Motors at this very moment is an auction for an Acura MDX S.H.I.E.L.D vehicle, one of only 10 made that the seller claims was used in filming of The Avengers.

The crossover is being sold by Scottsdale Motor Company, and while the eBay auction is up to nearly $19,000 with less than four days remaining (at the time of this writing), the dealer's website is asking $42,900 for this piece of movie memorabilia.

What you see is no mere prop, though. This S.H.I.E.L.D. vehicle is a proper 2011 MDX, equipped with the available Technology Package and leather from the factory. The flat black paint was even applied by Acura itself, and the graphics were added by the film studio's art department.

Actual modifications to the vehicle were done by Cinema Vehicle Services in California and include those fender flares (originally meant for a Ford truck), the front push bar, an LED light bar (not currently installed) and 18-inch wheels wearing beefy BFGoodrich All-Terrain radial tires. Those rollers required significant suspension mods to fit, so the body was raised, sway bars disconnected and air shocks installed. The buyer will also get the factory wheels and tires, but we hope they never use them.

While it's no Lola, this MDX is the closest you're ever going to get to owning one of Coulson's cars. Now, where did the NSX Roadster that Tony Stark drove off in at the end of The Avengers wind up?