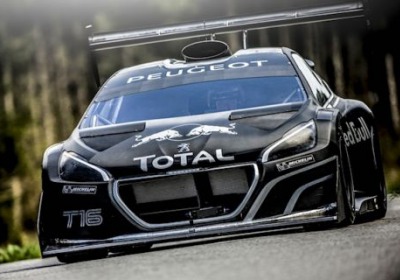 The annual Pikes Peak International Hill Climb is one of the few events in motorsport with an Unlimited Class that is truly... well, unlimited. To put the word 'unlimited' in perspective, consider the Red Bull-sponsored Peugeot 208 T16: its 3.2-liter bi-turbo V6 engine puts out 875 maximum horsepower, sending power to all four wheels through a six-speed sequential gearbox. That's powerful enough to catapult the T16 from 0-62 miles per hour in a scant 1.8 seconds. Keep it planted and it'll hit 125 in 4.8 seconds and 150 in 7.0 flat.

That, ladies and gentlemen, is freakishly fast.

Just ask Sébastien Loeb, a man who's no stranger to high-performance machinery, having won nine World Rally championships, who said of the T16 after his first testing session: "I've never driven anything that accelerates so fast! ... It's got the downforce of a Formula 1 car, the wide tires of an endurance racing prototype and a differential like a WRC car."

And that right there is the automotive definition of 'Unlimited.' Oh, did we mention that the T16 is one of the meanest looking four-wheeled vehicles we've ever laid eyes on? See for yourself in the high-res image galleries, press release and video below.

When Sébastien Loeb's helicopter landed alongside the high-security track at La Ferté-Vidame, in northwestern France, the rally star believed he was in for a routine test session. After just a handful of laps in the car, he realised that this was something different, however... "The 208 T16 Pikes Peak is a rocket! It's so powerful! The first time you drive it, each gear change practically stuns you. The shifts are really brutal, and it takes a little time to anticipate the sudden jarring. You get used to it, but it was quite disorienting to begin with."

The Frenchman may have seen it all on world rallying's most challenging stages, but his words were far from blasé after his first taste of the 208 T16 Pikes Peak. "I've never driven anything that accelerates so fast!" he remarked. "In the lower gears, a Formula 1 car doesn't deliver maximum power. With the Peugeot, though, it's bang, bang, bang as you move up the box from standstill. Thanks to its four-wheel drive transmission and turbocharged engine, its pull-away performance is phenomenal! You find yourself in sixth gear at 240kph in no time at all!" Indeed, with a 0-100kph time of 1.8s, the 208 T16 Pikes Peak would leave any F1 car standing...

It is not only the gearbox which made a big impression on rallying's superstar. "Thanks to its aerodynamic downforce and wide tyres, its braking is amazing, too." he exclaimed. "In fact, the 208 package is a combination of the best of several worlds: it's got the downforce of a Formula 1 car, the wide tyres of an endurance racing prototype and a differential, like a WRC car..." In short, it's a cocktail that gives you wings...

As the familiarisation process continued, Sébastien Loeb was clearly won over by the unique experience: "I have driven many types of car in my career, but this is very, very different. Its acceleration performance and stopping power are more like those of a Formula 1 single-seater than a rally car. Its handling is fantastic as well; there's so much grip, and the all-wheel drive transmission makes it very stable. It's got huge potential."

Like any thoroughbred, however, the 208 T16 Pikes Peak will need to be broken in, since Sébastien Loeb has no intention of allowing the car to be the one in control. On the contrary! With nine world rally titles to his name, he approaches the mission with his trademark calm, however: "This track isn't very wide and there aren't any run-offs, so I'm taking things one step at a time. I don't know what the car's limits are yet but it was important to do this run on a circuit today. Now we have a better idea of where we stand and a better overview of the car's potential. After that, the challenge will be to try to feel totally at one with the car on the Pikes Peak Hill Climb itself. That will take some work..."

When the big day comes to race to the Colorado summit at an altitude of 4,301 metres, Sébastien Loeb will need to be capable of mastering every buck and kick of the thoroughbred if he is to steer clear of the many pitfalls that await him along the giddy 20-kilometre course. And that will require perfect osmosis between the French champion and his extremely powerful steed.

To give this fusion every chance of happening, Peugeot Sport has scheduled a busy test programme at circuits, on roads and at altitude as the next phase of this extraordinary project which the multiple world rally championship finds particularly stimulating: "I really can't wait to get to drive the 208 T16 Pikes Peak in Colorado!" A little patience, Sébastien. There are now less than two months to go...

See also: Peugeot teases its 208 T16 Pikes Peak racer, Peugeot returning to Pikes Peak with S'ebastien Loeb [w/video], The 2013 Peugeot 2008 is a global crossover with efficiency at its heart [w/video].