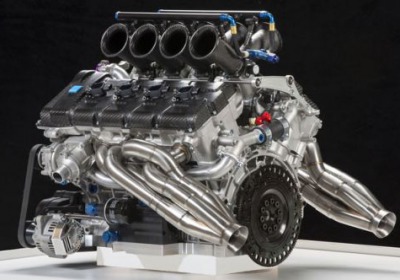 Volvo may be better known for turbo fives and inline fours, but in 2005 it launched the XC90 with a new eight-cylinder engine built for it by Yamaha. Fast forward to this past June when Volvo announced its intention to enter Australia's V8 Supercars series, where it would compete with the likes of Ford, Holden, Nissan and Mercedes-AMG. This is the engine with which it intends to do so.

Revealed this weekend at the Sydney 500, this competition-spec powerplant is based on the same B8444S that powered the XC90 and S80 (not to mention the Noble M600), but tuned for racing duty to be shoehorned into the new S60 touring car. The 60-degree aluminum block has been bored out from 4.4 liters to 5.0, its compression ratio boosted to 10:1, modified to run on E85 bio-ethanol and its redline increased to 7500 rpm. Volvo also promises a unique engine note from its new racers.

While Volvo and its racing partner Polestar haven't released official output numbers, regulations call for outputs between 620 and 650 horsepower – in any event, a whole lot more than the 311 hp it produces in stock form. (Noble managed to squeeze that much out of the same block, but that required twin turbochargers while this unit remains naturally aspirated.) Scope out the details in the press release below and the photos from the reveal in the gallery above.

Volvo has unveiled the engine that will power its two Volvo Polestar Racing S60s in the 2014 V8 Supercars Championship.

"As the first luxury car manufacturer to field a factory team in the V8 Supercar Championship, we're delighted to share this milestone moment with you and reveal our race engine for the 2014 V8 Supercar season," said Matt Braid, Managing Director of Volvo Cars Australia.

"The race team at Polestar have worked hand-in-hand with the engineering team at Volvo Cars to design, build and develop a race engine in Gothenburg, Sweden, to compete in Australia's premier motor racing category."

The global resources of the Volvo Car Group and Polestar, Volvo's performance and motorsport partner since 1996, are being fully utilised to facilitate the development of the Volvo Polestar Racing V8 Supercars in readiness for the 2014 season.

The Volvo B8444S 4.4-litre production V8 has been modified and built specifically for racing in the V8 Supercar Championship by Polestar – supported by the same people in Volvo Car Group who are behind the innovative four-cylinder Drive-E road car engines, which debut in Australia next year.

Thanks to its compact size and narrow 60 degree vee configuration, the B8444S is a truly unique engine on today's racing grid. With this in mind, motorsport fans can expect to instantly recognise the Volvo Polestar Racing S60s in 2014 thanks to the engine's distinctive soundtrack.

Christian Dahl, Managing Director of Polestar, said of the race engine: "We have completed a number of high-rev simulations and long-distance runs and we're very happy with the figures and outcomes we've achieved. The next step is to fit the engine to the race car and continue the pre-season development timetable."

Development of the race engine began back in May 2013. The first block was completed in late October and had its first run on the dyno in mid-November.

"So far, everything is on track with the race engine," said Volvo Car Group Motorsport Technical Director Martin Persson.

"On paper, this race engine and the new Drive-E engines are quite different. But from an engineering perspective it is a very similar process, and that is to push your imagination and creativity to the limit within a specific set of targets.

"For instance, whether you are aiming for leading efficiency or the most powerful race engine ever to be heard in the Australian V8 Supercars Championship, you will strive to reduce weight, friction, heat and to maximise power."

Further information about Volvo Polestar Racing will be released in due course.

See also: Volvo to test 100 self-driving cars on Swedish roads [w/video], Volvo's pedestrian airbags may already be on their way out, Volvo V60 Polestar is one hot hauler.