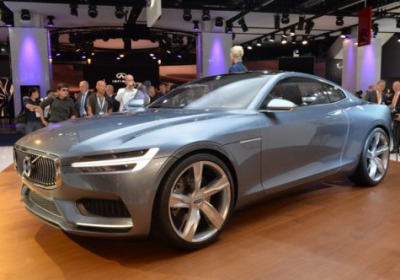 Despite the impressive production debuts from Porsche and BMW at this year's Frankfurt Motor Show - the 918 Spyder and the i8, respectively - there was one car that captured the attention of the press and the public alike, enough so that we awarded it our overall top pick of the show: the Volvo Concept Coupe. Most concepts never make it to production, but the car's reception has been so positive that Volvo's board of directors is considering to produce it in limited quantities, Auto Bild reports. Italian coachbuilder Bertone could handle the limited production run.

Styled after the classic P1800, the Volvo concept was similar to the new Porsche and BMW in that it was equipped with a high-performance hybrid drivetrain. But Volvo took a different route from there, giving the sleek coupe a turbocharged and supercharged 2.0-liter four-cylinder engine paired with an electric motor at the rear axle. All in, the combo is good for 400 horsepower and 490 pound-feet of torque.

If the Concept Coupe makes it to production, it may not get the trick hybrid drivetrain mentioned above, Motor Athority reports, but a milder plug-in hybrid setup or even just a conventional fuel-burning engine. In any case, it would be a treat if Volvo produced a fully functional, street-legal Concept Coupe, though at that point we're thinking it would be due for a name change.