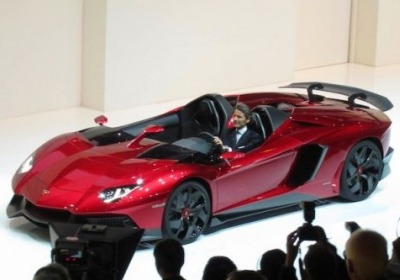 The Volkswagen Group is comprised of 11 brands producing 240 vehicles across 49 factories throughout the world. So the best way to show off the range of the VW family is to cram a few thousand journalists and VIPs into a massive makeshift stand to outline the Group's goals, what's in the pipeline and what you'll be able to buy later this year.

To that end, VW pulled out all the stops on the eve of the 2012 Geneva Motor Show, bringing along 10 vehicles from across the range. We'll be delving into the details of each over the next two days of show coverage, but before that happens, you can read all about what we saw tonight from the cheap seats after the break.

The Bugatti Grand Sport Vitesse can hit 223 mph before the occupants have to raise their voice to chat.

First up was the 2013 Audi A3, the first vehicle to use VW's new MQB modular architecture. Audi claims that in 1.4T quattro spec, the A3 weighs nearly 180 pounds less than its predecessor and packs oodles of Gen-Y tech. Audi is also planning a plug-in hybrid version that's due out in 2014.

The yin to the A3's yang was the Bugatti Grand Sport Vitesse, the world's fastest roadster that can hit 60 mph in 2.6 seconds and hit 223 mph before the occupants have to raise their voice to chat.

We're sure GM's lawyers will have a field day with the Amorak Canyon concept, an all-wheel-drive version of its not-for-U.S. pickup that's packing a 180-hp turbo diesel churning out 310 pound-feet of torque shuffled through a rock-crawling-capable eight-speed automatic. VW is calling it a concept for now, but says production will begin in Hanover by the end of the year.

Porsche claims the new Boxster has lapped the Nürburgring 12 seconds quicker than before.

Next up is the all-new Porsche Boxster, which is 77 pounds lighter than the outgoing model and gains an extra 10 horsepower while consuming 15 percent less fuel than its predecessor. Porsche claims the new Boxster has lapped the Nürburgring in 7:58 – 12 seconds quicker than the last generation – and can drop its top in nine seconds flat. We'll be driving that later this week, so expect full impressions from the road early next week.

Skoda rolled out its version of the Up!, the Citigo, which seats four, has plenty of glass and is aimed at family that need a second car or first timers looking for something small and inexpensive to bounce around town.

Far more interesting was the Giugiaro concept, a four-seat sports car with gullwing doors and plenty of room in the back seats for the kiddies. A VW drivetrain of unknown province lives underneath, but the major feature is a pair of screens mounted on the steering wheel that take place of the exterior mirrors. Sounds safe. But then again, that's why it's a concept.

The Lamborghini Aventador J is the lowest Lambo ever produced. Yes, it's sold.

Then there's the Lamborghini Aventador Jota (or J) that's not only the lowest Lambo ever produced, but comes with a patented carbon fiber skin coating the interior to match its fully carbon fiber passenger cell. Yes, it's already sold. For 2.1 million euros – not including VAT.

Seat has revived the Toledo marque and it's as exciting as the midwest town. It's a Jetta. With a hatchback. And 500 liters of storage. Moving on...

Finally, we've got the Bentley EXP 9 F Concept, the automaker's much anticipated SUV. Being a Bentley, it's packing V12 power up front, acres of hand-stitched cow hide and an optional plug-in hybrid drivetrain.