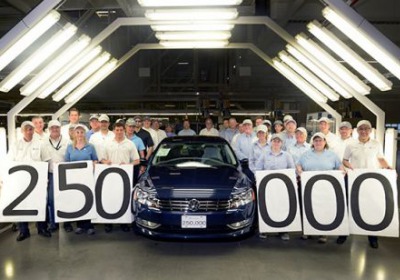 It hasn't been without incident or union organizing drive, but the Volkswagen plant in Chattanooga, TN has built its 250,000 Passat in just a little over two years. The Night Blue Passat TDI with black leather has come just two years and five weeks after the first customer car came off the line on April 18, 2011.

In the last year the plant operated at the 150,000-unit capacity that it was intended for, but the downturn in Passat sales and subsequent worker layoffs mean it will be a challenge to repeat the feat. The plant does have the world's largest solar park, though, and you can't take that away from them.

You'll find the official hand-clapping in the press release below.

"Two years ago our team members had just learned to build cars," said Frank Fischer, CEO and Chairman of Volkswagen Chattanooga. "Today we celebrate a quarter of a million Volkswagen Passats from Chattanooga. I am very proud of this team."