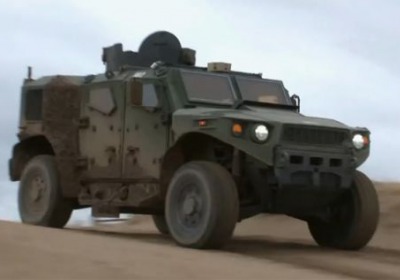 The military has been studying the implementation of alternative drivetrains for years, a tiny sampling of which includes the diesel-electric hybrid technical hauler and L-ATV from Oshkosh Defense and the Aggressor from Quantum Technologies. There was also ADA Technologies' work with ultracapitors, General Motors' focus on fuel cells and the roll out of electric motorcycles for Special Forces. In the Ultra Light Vehicle (ULV) prototype vehicle pictured above, we have the latest developments in the Department of Defense's hybrid interest combined with a need to develop a lightweight replacement for the AM General Humvee.

In 2010 the Office of the Secretary of Defense put the Army's Tank Automotive Research, Development, and Engineering Center (TARDEC) in charge of developing a personnel carrier that could "balance payload, performance and protection," and do so without exorbitant cost. Armored Humvees can weigh more than seven tons, and while the ULV is just under 14,000 pounds, the new vehicle can do a lot more with its weight.

The Subaru turbodiesel under the hood puts out 175 horsepower and 260 pound-feet of torque. That's not much for pulling 13,916 pounds, so it's assisted by two Remy 410HVH HT electric motors each capable of adding 268 continuous hp and 369 peak hp, along with 844 lb-ft of continuous torque or 1,221 ft-lbs at peak. They're only limited by the 14.2 kWh lithium-ion battery rated at 65 kW of continuous power and 180 kW of peak power, but still, TARDEC says the ULV can do 21 miles on electric power and on the flats has a combined range of 337 miles at 35 mph.

It's Mine Resistant Ambush Protected (MRAP) design protects occupants - as does the lack of a driveshaft - it has 18 inches of suspension travel, can traverse a 40-percent slope, climb an 18-inch step and climb a 60-percent incline. If it meets OSD specs it will also cost no more than $250,000. It's a long way from going into service, but it has entered ballistic and explosive testing and, assuming it passes the tests, it will move on the next phase. There's a clip of it in action in the video below, or head to the TARDEC site for a thorough spec-sheet rundown.