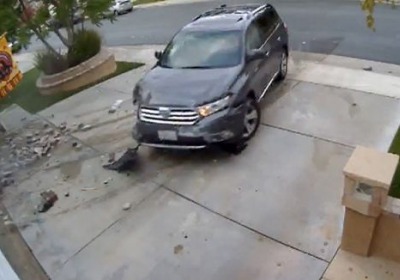 There are, as they say, two sides to every story, so after we posted a video on Monday showing what an owner claimed to be a case of unintended acceleration causing her Toyota Highlander to crash into a house twice, Toyota reached out to us revealing some additional information about the incident.

Following this crash, which took place back in November, Toyota had this Highlander inspected and pulled data from its Event Data Recorder (EDR), or Black Box as we've come to call it. Not only was this the first time we've seen a claim of unintended acceleration like this caught on video, but now, also a first, we have actual data showing what the vehicle itself recorded during this frightening ordeal.

Brian Lyons, Toyota Communications Manager for Safety and Quality, first gave us some information about the Highlander in question, including the fact that it was a 2012 model. The 2012 Highlander came from the factory with a brake override system, meaning it was not part of the company's initiative in 2010 to add the system to all 2011 models. Also, after looking at the data from the EDR, he said – as many of you pointed out in the comments for the previous post – that the "brake pedal was never touched." In the video, you can see that the crossover's brake lights never come on, and the EDR's data backs this up.

The data pulled from the EDR – posted in the gallery below as two images – shows the two "events," which were recorded each time the vehicle impacted the house. In the first event, the data provided by Toyota shows that 3.6 seconds before the impact, the vehicle began to slow down before speeding up to almost 15 miles per hour as it slammed into the house. In the second event, which resulted in a more violent collision with the house, the Highlander reached speeds of almost 30 mph with the engine racing at 4,400 rpm. In both images, it shows that the brake switch was in the "OFF" position the entire time, indicating that the driver was not attempting to press the brake. We asked Toyota if a faulty brake switch would cause the data to show the brake switch "off" and not allow the brake override to operate properly, and Lyons said no. Plus, there is a hard physical connection from the brake pedal to the brakes themselves, so an electrical fault couldn't have kept them from functioning.

Here's a portion of the letter that Toyota sent to the vehicle's owner after the inspection:


Your vehicle's throttle, accelerator and related components were inspected and found operating as designed, within factory specifications. No binding or obstructions were found in the throttle components. The brake system was also inspected and no problems were found.

The video is reposted below for you to watch. We reached out to the owner of the Highlander for a comment, but have yet to receive a response.