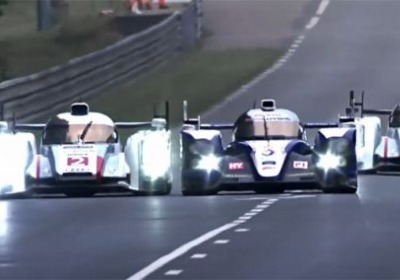 Two weeks ago, Audi released its short video about this years 24 Hours of Le Mans, and now Toyota has put the experience into its own words and pictures. Called The Ultimate Endurance Race, the clip and accompanying press release focus on how hybrid power helped Toyota claim second and fourth places with the TS030 Hybrid in just its second year competing at Le Mans.

There are some brief scenes of the battles had this year, like when Lucas di Grassi in the Toyota almost kissed Allan McNish in the Audi above, but the best part might be when Toyota promises it will be back. Next year, it's gonna be good. You'll find the relevant words and the images just below.

Not only did the team's performance demonstrate the bulletproof reliability of both TS030 HYBRID racers, it has also become ever more evident that hybrid technology is now an integral part of world-class motorsport.

During his interview in the short film, TOYOTA Racing Driver, Alex Wurz said: "There is no more way to win this race [Le Mans 24 Hours] without hybrid."

The film crews were given unprecedented access to TOYOTA Racing during the entire Le Mans week, starting with scrutineering of the TS030 HYBRID at Le Mans city centre through to the chequered flag one week later. Enjoy the twists and turns, on and off the track, and all the emotions the epic race generates, captured with state-of-the-art digital cinematography equipment in high definition.

TOYOTA Racing's #8 car with Anthony Davidson, Stéphane Sarrazin and Sébastien Buemi fought for the lead throughout the 24-hour race eventually settling into a fine second place finish overall, while the #7 car with Alex Wurz, Nicolas Lapierre and Kazuki Nakajima crossed the finish line in fourth place.

Next week, TOYOTA Racing's #8 car and crew, as well as the FIA World Endurance Championship fraternity returns to racing at the 6 Hours of São Paulo in Brazil after a 10-week break. Track action begins on August 30 with the race taking place on September 1.

Follow TOYOTA Racing on Twitter and Facebook for all the latest from Interlagos, where the team claimed its first win in the inaugural 2012 FIA WEC season. Post-race highlights from the six-hour race will be available on Toyota Europe YouTube Channel on September 2 http://www.youtube.com/user/ToyotaEurope

The Le Mans 24 Hours short film will be screened publicly for the first time on the hybrid-themed Toyota stand at the 2013 IAA Frankfurt Motor Show in September. Toyota and motorsport fans around the world can catch this short film to be screened at upcoming events.