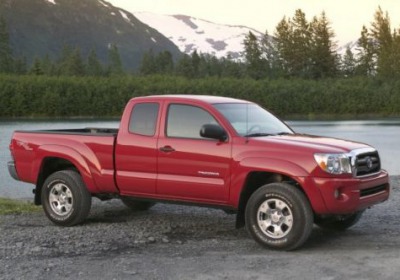 Toyota is voluntarily recalling 342,000 Tacoma Access Cab pickups, produced between 2004 and 2011. The wide-ranging recall is due to faults in the screws that attach the belt pre-tensioner to the belt retractor. There are concerns that the screws can loosen themselves over time, especially if the access door is opened and closed with too much force. It's important to note that the recall only covers the driver and front passenger seat, and is limited to just the Access Cab trucks. Other body styles aren't affected.

If the screws come loose, the pre-tensioner and retractor spring could separate from the belt entirely, which would be bad news in a crash. There's no mention of injuries or accidents due to the faulty pre-tensioners. Owners affected by the recall will be notified soon, and asked to come in for recall service.

Owners of vehicles subject to this recall will receive a notification by first class mail.
Detailed information is available to customers at www.toyota.com/recall and at the Toyota Customer Experience Center at 1-800-331-4331.