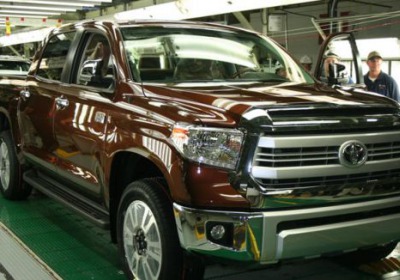 After going online in 2006, Toyota's San Antonio, Texas truck plant has just built its one-millionth vehicle, the 2014 Tundra 1794 Edition you see above. The plant originally focused on just the Tundra pickup, but the smaller Tacoma started rolling off the line there in 2010, as well.

Fittingly, the 1794 Edition (a new premium trim level for 2014) pays homage to the property on which the Toyota plant now resides – a ranch that was founded in 1794. Scroll down for the official press release for the plant's milestone, and be sure to check out the full gallery of Tundra 1794 Edition images as well.

A Million and Counting Toyota Texas Produces One Millionth Truck

SAN ANTONIO, Texas (September 18, 2013) – It's been said that the stars at night are big and bright, deep in the heart of Texas.

However, today in San Antonio, Toyota trucks are shining bright.

This morning, the 2,800 team members at Toyota Texas, on the city's South Side, celebrated the milestone of assembling the plant's one millionth truck – a Sunset Bronze Mica colored, 1794 Edition Tundra - with one thing in mind: satisfied customers.

"We are grateful for our loyal customers across North America who tell us they love driving Texas-built Tacomas and Tundras," said Chris Nielsen, president of Toyota Texas. "It makes me incredibly proud of our team members and 21 on-site suppliers every time I see one of our trucks on the road knowing that safety and quality are built into every one of them."

Toyota Texas produces the Tacoma and Tundra trucks and will celebrate its 10 year anniversary since groundbreaking this fall. The new 1794 Edition Tundra is a tribute to the ranch, founded in 1794, on which the truck plant is located.

Some notable facts and stats about Toyota Texas and the one millionth truck milestone:

-If you lined up the one million trucks Toyota Texas has produced, it would stretch approximately 3,700 miles; or approximately from The Alamo to Honolulu, Hawaii.
-The redesigned 2014 Tundra is among Toyota's most American vehicle ever. Styling was completed by Calty Design Research centers in Newport Beach, Calif., and Ann Arbor, Mich.; and it was engineered by the Toyota Technical Center, also in Ann Arbor.
-V6 and V8 engines for all Tacomas and Tundras are manufactured at Toyota's Huntsville, Ala., engine plant; all transmissions are manufactured in Durham, N.C.
-Production at the plant began in October 2006 with the Tundra. Tacoma production was added in the summer of 2010.
-21 on-site suppliers, who employ 2,900, have had a big hand in ensuring that quality, durability and reliability are built into every truck.

Explore the tradition and experience the innovation behind the best trucks in the world. Free weekday plant tours at Toyota are available to the public. Please visit www.ToyotaTexas.com for more information.