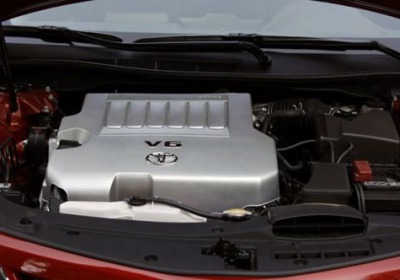 Over the past two years, Toyota has invested more than $2 billion at its North American production facilities, and it apparently doesn't plan on stopping there. To keep up with recent strong sales, Toyota is investing an additional $200 million at its engine plants in the Southern US to increase production capacity of its V6 engines.

The bulk of this money ($150 million) will go to expand Toyota's engine plant in Huntsville, AL, which is currently responsible for supplying engines – four-cylinder, V6 and V8 – to eight of Toyota's 12 domestically produced vehicles. That includes the best-selling Toyota Camry (shown above).

Toyota didn't say exactly what improvements are being made to the plant, but this follows last year's $80 million investment in the plant that is set to be completed by next year raising the engine capacity to 750,000 annual units including 362,000 V6s. The remaining $50 million will go to the casting plants of Toyota-owned Bodine Aluminum in Missouri and Tennessee, which supply engine blocks and cylinder heads to the Huntsville engine plant as well as others in Kentucky and West Virginia. Scroll down below for the official press release.

$200 Million Investment for V6 Engine Machining in Huntsville, Ala., and Related Casting Parts in Troy, Mo., and Jackson, Tenn.
Toyota Has Committed More Than $2 Billion to Expand North American Production Within the Past Two Years

Today's announcement represents Toyota's ninth manufacturing investment in North America over the past two years that now totals more than $2 billion. The result of this new investment is more than 4,000 new jobs solidifying Toyota's commitment to designing, developing and assembling vehicles in the region.

Toyota's Alabama engine plant's $150 million investment in this project represents its fifth significant new investment since it began operations a decade ago. Toyota Alabama's total investment will be $850 million once the machining project is complete by July 2015.

As previously announced, Toyota Alabama will hire approximately 125 upon completion of its current $80 million V6 engine assembly expansion by early 2014; its total employment will be 1,150. Annual engine capacity will be nearly 750,000 units.

Toyota Alabama currently assembles 4-cylinder, V6 and V8 engines for eight of 12 Toyota vehicles assembled in North America. It is the only Toyota plant globally to produce these three types of engines under one roof.

Bodine Aluminum, wholly-owned by Toyota Motor Corporation and a manufacturer of casting parts, will invest $50 million and create a total of 40 new jobs at its plant in Troy, Mo., and 10 new jobs at its plant in Jackson, Tenn., to provide cylinder heads and blocks to Toyota Alabama. Bodine's total investment will top $650 million and will employ nearly 1,100 at its three locations once the machining project begins.

"Today's investment of $200 million into three separate Toyota facilities demonstrates Toyota's commitment to North America and our localization efforts," said Osamu "Simon" Nagata, president and CEO of TEMA. "Our committment to our local communities where we produce engines, engine parts and vehicles has never been stronger thanks to our team members and their continued focus on safety, quality and continuous improvement."

"Toyota Alabama continues to play a key role in our efforts to build engines in the region for our loyal customers," said Jim Bolte, president of Toyota Alabama. "This vote of confidence gives our team members and community partners added motivation as we move towards our vision of becoming the most admired company in the state."

"Bodine's 100 years as a successful American manufacturer is a direct result of our exceptional workforce in Missouri and Tennessee," said Bob Lloyd, president of Bodine. "We look forward to serving our customer in Alabama, and ultimately, our loyal customers who drive Toyotas every day."