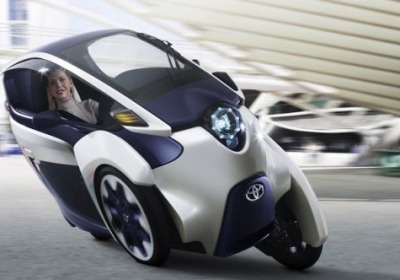 According to Toyota, the "i-ROAD takes the company closer to its goal of creating the ultimate range of eco cars." As you're surely aware, that range of eco cars includes the enormously successful Prius family, but this new machine is nothing like the hybrid hatchback. And it's not even a car – Toyota calls the i-ROAD a Personal Mobility Vehicle.

Toyota's i-ROAD Concept, which debuts at this week's Geneva Motor Show, is adorned with just three wheels, meaning it's just as much a motorcycle as it is a car, and the driver and passenger sit in tandem style instead of side-by-side. This arrangement allows for a very thin 850mm width, which is about the same as a large motorcycle. Because the cockpit is enclosed, the occupants don't need helmets, nor are they open to the elements outside.

Also like a traditional two-wheeler, the i-ROAD tilts through the turns and when driving on uneven surfaces. Toyota says its computer-controlled Active Lean technology automatically balances the vehicle with no input from the driver.

Despite the automaker's expertise in hybrid drivetrains, the i-ROAD is a pure electric vehicle, and Toyota says it "believes in the feasibility of EVs to serve as a main mode of transport for short urban journeys." There's a two-kilowatt motor in each front wheel, meaning the i-ROAD offers up just over five horsepower, which isn't a lot but should be enough to get moving up to city traffic speeds (no performance specs are available).

An on-board lithium ion battery allows for a range of around 30 miles, after which the vehicle can be recharged in three hours using "a conventional domestic power supply." We're a little unsure of what Toyota means by that – using a 110-volt outlet or a 220-volt outlet, or perhaps a unique charger? – but you're welcome to see the press release yourself below, along with a video showing the leaning three-wheeler in action.

Toyota City, Japan, March 4, 2013-Toyota Motor Corporation (TMC) will debut the "Toyota i-Road" personal mobility concept at the 83rd Geneva International Motor Show1 to be held in Geneva, Switzerland from March 5 through 17. The concept, a three-wheeler with motorcycle-like maneuverability, is ideally suited for short-distance urban travel and was designed to be a new way to enjoy mobility.

The Toyota i-Road is an ultra-compact, tandem two-seater electric vehicle developed under the theme of compact and refreshing mobility. While offering an enjoyable and novel riding experience with the same level of convenience as a motorcycle, the Toyota i-Road represents a way of overcoming various obstacles, such as congested city roads, lack of parking, and other commuting issues, in the path of the development of low-carbon and sustainable urban areas.

The ultra-compact body not only offers excellent maneuverability, but also minimizes space needed for parking. The adoption of a newly developed, automatic active-lean system provides great response and an exhilarating driving experience. The Toyota i-Road features a closed cabin so that passengers can proceed helmet-free to their destination in comfort, shielded from the weather in all seasons.

TMC will continue research and development toward the practical adoption of the Toyota i-Road as the first in a new category of electric vehicles.

Main Features
I. Ultra-compact with outstanding maneuverability
With a length of 850 millimeters, the Toyota i-Road has outstanding maneuverability and can be driven smoothly along roadsides, leaving road lanes open for other traffic. In addition, the Toyota i-Road's small size allows it to occupy only three-quarters to one-half of a conventional parking space, boosting efficient use of parking areas.

IV. Environment-friendly electric vehicle (EV)
As the Toyota i-Road is powered by an electric powertrain, it features a quiet ride and produces zero emissions during operation. Driving range on a single charge is approximately 50 kilometers2.

Seating two in tandem and under cover, i-ROAD is an electric vehicle with a range of up to 30 miles (50km) on a single charge. Using 'Active Lean' technology, it is safe, intuitive and enjoyable to drive, with no need for driver or passenger to wear a helmet.

It's the latest concept to emerge from Toyota's 40 years of research and development of vehicles that use less energy, place less of a burden on the environment and are practical in meeting people's everyday transport needs. i-ROAD takes the company closer to its goal of creating the ultimate range of eco cars.

Toyota is paving the way for several types of eco car to co-exist in the future, by adapting its Hybrid Synergy Drive technology for use in plug-in hybrid electric vehicles (PHEVs), electric vehicles (EVs) and fuel cell vehicles (FCVs). While hybrids, plug-in hybrids and FCVs are ideal for mainstream use over medium to long distances, Toyota believes in the feasibility of EVs to serve as a main mode of transport for short urban journeys, and has 10 years' experience in the research and development of PMVs.

People using this kind of vehicle want something that is more comfortable, offers better weather protection and is safer than a two-wheeler such as a scooter or motorcycle, but has similar benefits of low running costs, easy parking and around-town manoeuvrability.

The ultra-compact, three-wheel i-ROAD measures 2,350mm long and 1,445mm high and has a 1,700mm wheelbase. It's most significant dimension, though, is its width: at only 850mm, it is no wider than a conventional two-wheeler. Not only does this make for easy manoeuvring through congested traffic, it also means four can be parked in a single parking bay.

The zero-emissions, all-electric powertrain uses a lithium-ion battery to power two 2kW motors mounted in the front wheels, giving brisk acceleration and near-silent running. Driving range is around 30 miles, after which the battery can be fully recharged from a conventional domestic power supply in three hours.

Toyota's new and entirely intuitive Active Lean technology is the key to i-ROAD's high levels of stability, safety, comfort and fun-to-drive character. The system uses a lean actuator and gearing mounted above the front suspension member, linked via a yoke to the left and right front wheels. An ECU calculates the required degree of lean based on steering angle, gyro-sensor and vehicle speed information, with the system automatically moving the wheels up and down in opposite directions, applying lean angle to counteract the centrifugal force of cornering.

The system also operates when the PMV is being driven in a straight line over stepped surfaces, the actuator automatically compensating for changes in the road to keep the body level. The minimum turning circle is just three metres.

No special skills are needed to pilot i-ROAD; the Active Lean system offers a unique driving experience with the enjoyment of riding a two-wheeler, but with no need for the driver to stabilise the vehicle when manoeuvring at low speed, or when stationary.

As the driver doesn't have to put his or her feet on the road surface at any time, i-ROAD can be fitted with a safer, weatherproof, closed body and so can be driven without wearing a helmet. This design also allows for a more car-like environment on board, with the potential for features such as lighting, heating, audio and Bluetooth to be provided.

Toyota envisages its i-ROAD concept has the potential to play a significant role in reducing urban traffic congestion and air pollution. Commuters can use public transport or conventional private vehicles to travel to urban perimeter transportation hubs where they will transfer to the Toyota i-ROAD to complete their journeys into the city centre.