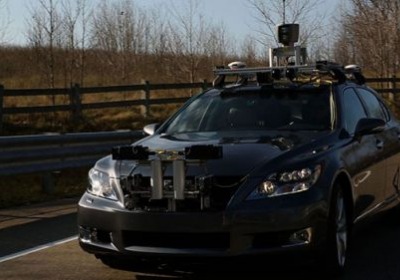 While Google and Audi explore the possibilities of autonomous vehicles, Toyota and its Lexus division are studying the intermediate step of vehicles equipped with a deep suite of technology that help drivers make the best decisions. Introduced at this week's Consumer Electronics Show in Las Vegas, the Lexus advanced safety research vehicle is an LS sedan fitted with three high-def color cameras to detect objects up to almost 500 feet away, 360-degree Light Detection and Ranging (LIDAR) lasers that can detect objects up to 220 feet away, three radar units to keep track of other vehicles at intersections, a precision odometer on the rear wheel, GPS that estimates orientation and an accelerometer.

Currently testing at a purpose-built 8.6 acre urban testing ground at the Higashi-Fuji Technical Center in Susono, Japan the Toyota research vehicle is being used to study how to make better drivers, as well as figuring out how to reduce crashes as the industry's journey through passive and active safety systems progresses. In the event of a crash, new rescue systems are also being tested.

Further investment is being put into the Intelligent Transportation System (ITS) that would use shortwave signals to harness information from the car and from other vehicles on the road, as well as roadside infrastructure and even pedestrians. Toyota reasons it could then build a picture of interactions and, for instance, alert the driver to a potential collision at a blind intersection.

Toyota's says its research "could lead to a fully autonomous car in the future," but for now, the point is that "a driverless car is just a part of the story. Our vision is a car equipped with an intelligent, always-attentive co-pilot whose skills contribute to safer driving." Improving driver education in this country would probably be a lot cheaper, but hey, we're for anything that helps make the roads safer places to be. There's plenty more tech-speak in the video and press release below.

The company's guiding strategy, called the Integrated Safety Management Concept, views traffic safety as a holistic blend of people, vehicles and the driving environment. The strategy carries through all five phases of operation:
- Initial time the driver and car begin a journey from a parked position
- Active safety systems designed to avoid a crash
- Pre-crash aimed at preparing for a collision
- Passive safety to help survive a crash
- Rescue and response after a crash has occurred

While key components of these research efforts could lead to a fully autonomous car in the future, the vision is not necessarily a car that drives itself. Instead, Toyota and Lexus envision technologies that enhance the skills of the driver, believing a more skillful driver is a safer driver.

"In our pursuit of developing more advanced automated technologies, we believe the driver must be fully engaged," said Mark Templin, Toyota group vice president and general manger of the Lexus Division."For Toyota and Lexus, a driverless car is just a part of the story. Our vision is a car equipped with an intelligent, always-attentive co-pilot whose skills contribute to safer driving."

Safety Research Vehicle: A Glimpse Into the Future
The Lexus advanced active safety research vehicle is equipped with an array of sensors and automated control systems to observe, process and respond to the vehicle's surroundings. These include GPS, stereo cameras, radar and Light Detection and Ranging (LIDAR) laser tracking.

The vehicle systems are capable of tasks such as scanning movement of objects around it, identifying a green light from a red light and measuring the trajectory of the vehicle on the road.
- A 360-degree LIDAR laser on the roof of the vehicle detects objects around the car up to about 70 meters.
- Three high definition color cameras detect objects about 150 meters away, including traffic light detection using the front camera and approaching vehicles using the side cameras.
- Radars on the front and sides of the vehicle measure the location and speed of objects to create a comprehensive field of vision at intersections.
- A distance measurement indicator located on a rear wheel measures travel distance and speed of the vehicle.
- An inertial measurements unit on the roof measures acceleration and angle changes to determine vehicle behavior.
- GPS antennas on the roof estimate angle and orientation even before the vehicle is in motion.

The research vehicle is a testing platform aimed at the development of systems capable of enhancing the driver's perception of his or her environment, assisting in the decision-making process and improving overall driving skills.

Building on Decades of Advanced Safety Technology
The research vehicle builds on Toyota's long history of safety innovations and advancements. This work includes a number of features that have been implemented in many vehicles across the Toyota and Lexus brands, including Anti-lock Braking System (ABS), Traction Control and Smart Stop Technology. More recently, advanced safety features such as Lane-Keep Assist system (LKA), Blind Spot Monitor (BSM) and the Pre-Collision System have taken active safety to a new level.

The 2013 Lexus LS offers the world's most advanced Pre-Collision System (A-PCS). The system helps the driver avoid or mitigate collisions with vehicles or pedestrians under a wide range of city or highway speeds, even at night. The 2013 Lexus LS also features an upgraded Lane-Keep Assist system (LKA) that employs sensors to help monitor the vehicle's position within the driving lane and respond to potentially dangerous conditions. An enhanced Blind Spot Monitor (BSM) with rear millimeter-wave radar monitors the vehicle rear side blind spots at 10 miles per hour or more, and Rear Cross Traffic Alert (RCTA) helps warn drivers to the approach of other vehicles when backing up. While on the road, Adaptive Cruise Control (ACC) constantly monitors the distance to vehicles ahead and is capable of operating at any speed, bringing the vehicle to a complete stop, and resuming at the preset speed once the road ahead is clear.

The 2013 Lexus LS is evidence of advancements and refinements in automated technologies over the last decade.

Driving Within a Smarter World
Toyota has committed to new research toward an Intelligent Transportation System (ITS), integrating the car with the driving environment. To accelerate development of vehicle-to-vehicle and vehicle-to-roadside infrastructure communications, Toyota began full-scale operations in November at new 8.6 acre ITS proving grounds, located within the Higashi-Fuji Technical Center in Susono City, Japan.Modeled after urban roads, the driving environment replicates roads and traffic signals and simulates real-life traffic situations using other vehicles, pedestrians and control devices.

ITS uses dedicated short wave signals to link vehicle-to-vehicle and vehicle-to-infrastructure radio communications over a wide area to create potential collision warnings. Alerts include:
- Impending collision at a blind intersection
- Vehicle changing lanes in another vehicle's blind spot
- Rear collision with a vehicle stopped ahead

The system is designed to help prevent accidents involving pedestrians and other vehicles using information continuously collected by the vehicle from other vehicles, infrastructure and pedestrians. Connecting people, vehicles, traffic environments and infrastructure with state-of-the-art electronic and telecommunications technologies will help move toward safer and more efficient traffic environments. The Toyota ITS Proving Grounds will assist the company work toward the early practical adoption of evermore reliable systems by repeatedly conducting testing that can be difficult to perform on public roads, with changing environments.

Collaborative Development
ITS technology is being developed globally and cooperatively among most major automakers and regulators, and in cooperation with international ITS governing bodies. Toyota will continue step-by-step and layered introduction of individual, proven technologies within regulatory, legal and social frameworks acceptable in each country.

"The real value of research projects like this is reinforcing our focus on what a few years ago seemed an impossible dream and is now becoming more plausible," Templin said. "We, at TMC and Lexus, consider the elimination of traffic fatalities and injuries the ultimate goal of a society that values mobility."