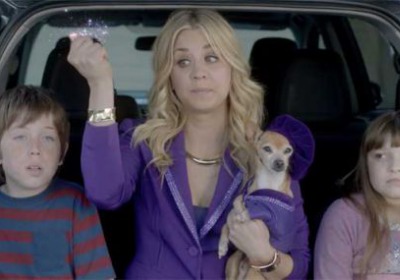 For viewers who plan on watching the Super Bowl only for the commercials, here's one for you to enjoy ahead of time. As we saw in the teaser video that Toyota released last week, will be making the transition from Big Bang to The Big Game as a wish-granting genie in a commercial for the 2013 Toyota RAV4.

Though not as entertaining as the actual teaser for this commercial, it still garnered a couple chuckles from the Autoblog crew. We won't spoil it for you, but a word of advice: if Cuoco ever shows up in your driveway granting you wishes, we'd suggest you be very clear what you want... and enunciate.

If you want to see the commercial before this Sunday's game, we have the video (and an accompanying press release) posted after the jump.

TORRANCE, Calif.(Jan. 28, 2013) – Embodying the modern, stylish and smart characteristics of the all-new RAV4, Toyota's new "Wish Granted" commercial starring Kaley Cuoco will make its broadcast debut on Feb. 3. The star of CBS hit show "The Big Bang Theory" will appear granting the wishes of a family in unexpected and creative ways during one of the biggest sporting and advertising events of the year. Cuoco's comedic chops made her a perfect partner in bringing the RAV4 Genie character to life.

"The all-new RAV4 is a testament to the people that drive it and live lifestyles that are full of energy and enthusiasm, which is one of the reasons we are so pumped to work with Kaley to showcase it," said Jack Hollis, vice president of Toyota Division Marketing at Toyota Motor Sales, U.S.A., Inc. "We wanted to share Toyota's 'Let's Go Places' spirit of journey with viewers of the big game in a light and relatable way."

"Wish Granted" features the all-new RAV4 that comes with a modern genie played by Cuoco who grants wishes to the Henderson family, the owners of the vehicle. With a loveable, sidekick dog, Chester, Cuoco goes about granting the wishes of each family member in her own interpretation. The journey takes the family on a series of unexpected adventures including a trip to space and fulfilling the daughter's request for princessdom.

"As soon as I saw the script, I knew I wanted to be in this commercial because the sense of humor was right up my alley," said Cuoco. "It was so much fun and I'm excited that everyone gets to see it now and again on Sunday."

The 60-second RAV4 commercial is designed to resonate with people who lead active, busy lifestyles but still make time to embrace everyday adventures. It speaks to drivers who want a stylish, capable and versatile vehicle that keeps up with the pace of their lives and still allows them to find the enjoyment and excitement along the way.

The commercial also features an image submitted by Ryan Koch of Fitchburg, Wis., as part of the Get In the Big Game opportunity that took place earlier this month. Fans were invited to upload photos of themselves using the hashtag #wishgranted to Instagram and Twitter, and Koch's photo was selected to appear in the ad.

"Ryan's photo captures the spirit and lifestyle of Toyota's new brand direction – 'Let's Go Places' – and the all new RAV4," said Hollis. "Toyota's 'Let's Go Places' is all about inviting our customers on a fun journey with us, and the Get in the Big Game campaign was an opportunity to do just that."

"Wish Granted," created by Saatchi & Saatchi LA, will run during the first quarter of Sunday's game, followed by the Toyota Super Bowl Today Post-Game Show, which will also include the airing of two additional new commercials highlighting the Tundra Endeavour tow and the recently-launched company direction, "Let's Go Places." For a preview of "Wish Granted" spot before game day, please go to http://bit.ly/wishgranted.