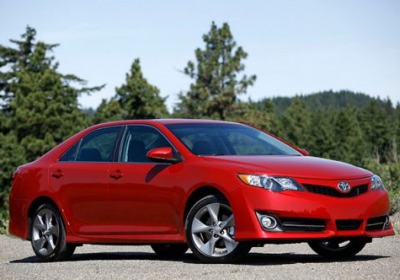 Eleven months after Toyota claimed the 2012 sales crown a couple of months early thanks to the Camry, the headlines this year have been quite a bit different to last. Even though the Camry remains the best selling car so far in 2013 and its volume has increased year-on-year, it has lost market share due to the 20-percent sales explosion in the midsize segment. That means people are buying more of the competitor offerings like the Honda Accord, Nissan Altima and Ford Fusion - the Altima, in fact, outsold the Camry by 100 units in March.

In July it was reported that Toyota was upping Camry incentives and fleet sales to keep its lead and that dealer inventory was climbing as, again, competitors got better at fighting the champion. In August Ford doubled down on production of the Fusion, adding a line in Flat Rock, MI to keep up with demand.

Bloomberg has a report looking at the numbers behind the Camry's dominance, as well as what appears to be a recorded group interview with Toyota USA CEO Jim Lentz, and wonders aloud whether the Camry will be able to hold its top spot in 2014. Barring catastrophe it has this year locked up, being more than 30,000 sales ahead of the next-best seller as of the end of August, but it has done so with higher incentives and lower transaction prices than its competitors. According to Strategic Vision the Camry's consideration rate among consumers has also declined by a percentage point, while the consideration rate for the Accord and Fusion has increased by one point and two points, respectively.

Analysts, and Toyota, cite better competitor products as well as the fact that the Camry is a year older than any of them to explain what's happening, but a year from now the three major competitors won't be as new either, and Toyota knows a thing or two about moving cars. Still, the Camry has been number one for 15 of the past 16 years, its only second-place blip coming in 2001, so it's way early to be talking about the fall of the champion. Stay tuned, and have a listen to Lentz's comments on the position and the fight ahead in the interview below.