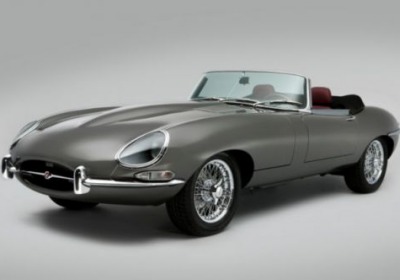 Paul Branstad loves the shape and purity of the Series 1 Jaguar E-Type, produced from 1961 to 1968, but appreciates the longer length of the Series 3 V12 model, which affords occupants a more comfortable space in which to enjoy long trips. So when Branstad brought his damaged left-hand-drive 1968 roadster from its home in the US to Classic Motor Cars in the UK for a restoration, he had a special request: restore his car, but make it a bit longer.

"This is something that we have never done before. Our client wanted the interior leg room of a Series 3 V12 E-Type but the aesthetics of a Series 1 car," says Nick Goldthorp, managing director of CMC.

For the restoration, CMC added 4.5 inches of length to the floor pan of Branstad's E-Type to create the extra legroom. Goldthorp relates, "The V12 was actually nine inches longer than a Series 1 but a lot of the additional room was behind the seats as storage and was not required on our project." That's because CMC also built a trailer out of two E-Type rear ends that attaches to a custom-made removable tow hitch.

The convertible top also was raised 1.25 inches in the up position for better head room, and the trunk floor was lowered to make room for a custom 20-gallon fuel tank and a wider spare wheel. The Jaguar was restored with equipment that never made it onto Series 1 cars, such as power steering, air-conditioning, and a five-speed manual gearbox, while the suspension and brakes also were upgraded to improve performance.

Branstad named his E-Type "Kaizen," after the Japanese philosophy of continuous improvement that has been a guiding principle at Toyota since its founding days, and which has been imitated by Western auto manufacturers such as Porsche to great effect. Branstad says the name is appropriate because he believes Jaguar E-Type designer Malcolm Sayer would have approved of his car's improvements, which do maintain the car's essence, judging from the pictures.

We're happy to learn that Branstad commissioned the restoration because he intends to use the E-Type to travel in the US - we'll be keeping an eye out for the Kaizen E-Type and its unique trailer!

Be sure to check out the press release below and the photo gallery for more details on the build.

The E-Type that Jaguar Cars should have built

The world's first stretched E-Type has been unveiled and will go on show inLondonlater this week at a major automotive awards ceremony.

Built in 1968, the left hand drive Jaguar E-Type series 1 4.2 roadster has been stretched by four and a half inches during a major restoration carried out by Classic Motor Cars Limited of Bridgnorth (CMC).

Nick Goldthorp, Managing Director of CMC, said: "The car is phenomenal to drive. This is the E-Type that Jaguar Cars should have built. The extra space makes all the difference and actually alters the whole attitude of the car."

During the rebuild the owner, a client in theUnited Stateswho intends to travel widely in country, requested a trailer to be built. CMC built this from two E-Type rear ends joined together.

The trailer is ingeniously connected to the car via a removable tow hitch, which locks into position through the revering light aperture. The reversing light hides the hitch mechanism when the trailer is not in use. This is another first for CMC and the world of Jaguar.

The E-Type has been named "the Kaizen" by Paul Branstad, the owner, and takes its name from one of Toyota's founding principles, Kaizen, which means "understand the imperative to make continuous improvements and then get to work."

Paul Branstad said that he had named the E-Type in this way because he thought that the original Jaguar designer,MalcolmSayer, would have approved of what he wanted to do to the car while preserving its essence.

He added: "The stretched E-Type I have conceived sits between the Series I and the subsequent vehicles produced after the merger and formation of British Leyland, when the design of the cars underwent several transformations as a consequence of cuts in production costs and the need for more space that resulted in the Series II 2+2 and Series III V12."

Nick Goldthorp added: "This is something that we have never done before. Our client wanted the interior leg room of a Series 3 V12 E-Type but the aesthetics of a Series 1 car."

"We have added four and a half inches to the floor pan, which will give the leg room of the V12 plus an additional one inch if required. The V12 was actually nine inches longer than a Series I but a lot of the additional room was behind the seats as storage and was not required on our project."

Nicksaid: "By adding four and a half inches to the length of the car we were able to retain the overall look of the Series 1 and also turn this E-Type into a unique car."

Along with these radical developments, the roof line has been raised by 1.25 inches above the drivers head and the boot floor lowered and reshaped to build in a 20 gallon fuel tank and to allow a wider spare wheel as the car was fitted with 16" diameter wire wheels shod with lower profile radial tyres.

The car has also been built with a host of CMC's upgrades that range from air conditioning to power steering, upgraded brakes, five-speed gearbox, suspension and handling upgrades, amongst others.

Paul Branstad said: "As an idea, the Kaizen E-Type was a conceit of the imagination but the car itself has now become a reality by taking advantage of modern material and component technologies provided by CMC."

"With nine inches more wheelbase, the 2+2 was too long to be beautiful, but the four and a half inches added to the Kaizen E-type could make the car even more beautiful than the original Series I edition."

He added: "Perhaps this car would have represented the very last chance forMalcolmSayerto apply his ideas for the E-Type."

On April 17 1968, this Series 1 4.2 litre, left hand drive, open 2 seater Jaguar E-Type rolled off the line at the company's Coventry works. The car was shipped immediately to Jaguar Cars inNew York,USA, but the receiving dealer is not known.

The car was purchased by CMC's client and sent to the company after being involved in a heavy front impact.