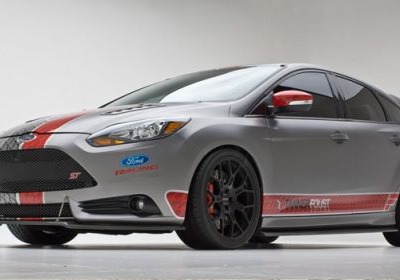 Racer and Top Gear USA host Tanner Foust has partnered up with Cobb Tuning to create a special-edition Ford Focus ST. The limited-edition hatches will come packing a reflashed ECU, special intercooler, tweaked intake and freer-flowing exhaust for up to 20 percent more power than the stock creation. Cobb says that the changes should push the final dyno figure to above 300 horsepower. Buyers can also expect to find special carbon fiber aerodynamic bits on board along with a new grille, graphics and wheels. Cobb hasn't released pricing on this Tanner Foust Edition Ford Focus ST as of yet, but you can bet the whole kit won't be cheap.

Fortunately, the company will sell you bits and pieces from the overall package for your Ford, and word has it engineers are also whipping up a Foust Fiesta ST. Look for Cobb's Focus ST website to go live next month, complete with accurate specs and pricing. Until then, enjoy clicking through the gallery here. You can also check out the full press release below.

Based on the success of the concept that Foust first unveiled at the SEMA show in November, COBB Tuning will produce a line of special Tanner Foust Edition aftermarket parts for the Ford Focus ST.

"COBB Tuning gave us the opportunity to bring their well respected expertise to a new platform and make a package that was very affordable to the first-time performance car buyer," said Foust.

The company will produce custom ECU calibration, intercooler, intake, exhaust, and suspension components, increasing the horsepower some 20 per cent over the stock output, to 300 horsepower, as well as making upgrades to the vehicle's stability and handling.

"Working with Tanner on this project for the Focus ST is exciting for us," said COBB Tuning CEO Trey Cobb. "He is a driver who really understands how vehicles can best put power to the ground and that's what helps us to develop great upgrade packages."

The Tanner Foust Edition Ford Focus ST will also feature carbon fiber aerodynamics accessories, a custom grille, graphics, and a wheel and tire package. Components will be available as a multi-stage upgrade package and sold individually. The special edition vehicle will be made available for sale through select Ford dealerships nationwide later this year, and directly from COBB Tuning.

"I've been a fan of hot hatches since I was a kid living in Scotland," said Foust. "This special edition Focus ST is what happens when I get to take an already great hot hatch and push its performance limits to make it exactly what I wanted as a kid and what I would like to drive on the street."

Foust draws on his sizeable experience behind the wheel in working with COBB Tuning on powertrain development for the vehicle. In addition to his work as a television personality on Top Gear USA, Foust is a top stunt driver and a Ford Racing driver who has earned national championships in rallycross and drifting.

COBB Tuning has a strong legacy with turbo-based vehicle platforms and is respected for their design, engineering, manufacturing and service. The Focus ST, which is powered by a 2.0 Liter EcoBoost engine, is a new platform for COBB Tuning.

"The Tanner Foust Edition Focus ST is the natural extension of the work we've been doing with Subaru, Mazda and BMW," said Cobb. "This is a great opportunity for us to help redefine the aftermarket with Ford."

The company is also developing a Tanner Foust Edition Ford Fiesta ST, that is expected to debut at the SEMA show this fall. A new website, www.FoustEdition.com, featuring detailed specifications, pricing and availability, will be unveiled in April.

ABOUT TANNER FOUST
Tanner Foust is a versatile and multi-talented driver known for his supreme car control and a proven track record of podium placements and national championships.

When he isn't racing, the professional driver also performs in films and on television. He is an on-air host for the US version of the seminal BBC auto show Top Gear, produced by BBC Worldwide Productions and airing on the HISTORY channel.

His stunt driving includes performing as a lead driver in the Fast and Furious: Tokyo Drift, Bourne Ultimatum, Dukes of Hazzard, Red Dawn and Iron Man 2 movies, and he also handles stunt driving in numerous popular TV shows and commercials.

MORE INFORMATION
PHOTO: The Tanner Foust Edition Focus ST, powered by COBB, will be available for sale in 2013.