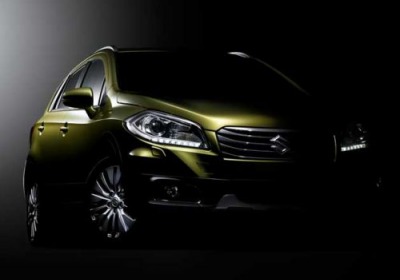 Suzuki may be retreating (amidst booming sales) from the US market, but its efforts to woo European buyers are still going strong. Witness as proof these shadowy teaser images of the automaker's new C-segment crossover that it plans to unveil at the Geneva Motor Show next month.

Until the official debut, we've got just a few tidbits of information to report about the upcoming Suzuki. We're told, and can see, that the car has been modeled on the S-Cross concept car from the 2012 Paris Motor Show. Quite a bit of translation has happened, however, from show car to production form, as we see that the sweeping greenhouse of the S-Cross has been ditched in favor of a traditional pillared setup, large LEDs have moved from the lower front fascia to under the headlamps, and the grille is now much more in line with the rest of Suzuki's current range. The crossover is still painted in a faintly froggish shade of green, though, so the weirdness hasn't been completely leeched out.

We're also informed that the new C-segment offering will have an available a four-wheel-drive powertrain and one of the largest luggage areas in the segment. All of which strikes us as good stuff, but we're still not convinced that this unnamed entrant could have turned the Japanese automaker's fortunes in North America – even if it would have competed in one of the industry's fastest-growing segments. Feel free to read over Suzuki's brief press release below and look at the images before speculating for yourself in Comments.

The series model of Suzuki's all-new C-segment crossover will be making its world premiere at the 2013 Geneva International Motor Show, which will be held from 5th to 17th March.

The C-segment crossover model is based on the concept car S-Cross initially introduced at the Paris Motor Show in September 2012.

With its clear crossover styling, its roomy interior and one of the largest luggage areas in the crossover segment, the new model will offer outstanding versatility.

Detailed information will be disclosed at the Suzuki press conference, scheduled for

Other Suzuki models on display will be the Alto, Splash, Swift, SX4, Jimny and Grand Vitara.

On the public days also the Kizashi will be exhibited.

*The 2013 Geneva International Motor Show will be open to the press on 5th and 6th March and then to the public from 7th March to 17th March.

See also: This is the facelifted Suzuki SX4 that we won't get, IIHS says these are the safest cars of 2013, Suzuki recalling 2,800 XL7 models over faulty fuel pump.