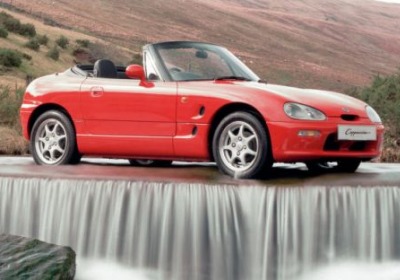 It's not a secret that a few of us here at Autoblog have a crush on Japanese Kei cars. The diminutive sizes and cheeky looks of most of the segment are certainly endearing factors, but it was the sporting Kei cars of the 1990s that made for the most delicious forbidden fruit.

Suzuki's entry in that time and market space was the Cappuccino, a rear-wheel-drive coupe with a removable roof and roll bar, powered by a 657cc three-cylinder motor. The car hung around the Japanese market until 1997 (and was booted up in Gran Turismo form for years after that). Now, rumor has it that the little coupe could be getting a reboot around 2016.

The reports are still a bit short on detail; some indicate that a new Cappuccino could be built up on an existing Kei platform from Suzuki. If the new car were to keep the RWD layout of the original, however, that would mean building up the model on the live-rear-axle bones of the Suzuki Jimny or Carry.

A stronger play is laid out with rumors that have Suzuki partnering with another manufacturer to help defray development costs and share in the rewards. Such a new platform would certainly help the Cappuccino carry on some of the good-handling credentials it built up in the early '90s. Considering that Suzuki just announced a partnership with Caterham, to supply the Seven with turbo'd three-cylinders, expecting that company to be a part of the project wouldn't be unrealistic.