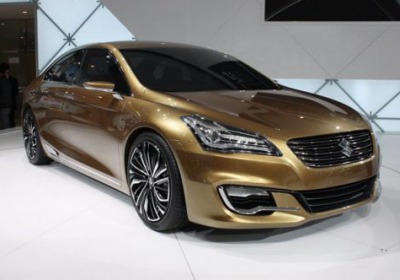 Looks can certainly be deceiving. Have a glance at this new Suzuki Authentics concept, for example – we were told that this would, essentially, be a proper sedan version of the new SX4, but our folks on the ground in Shanghai tell us it's actually much larger. Like, bigger than the Kizashi. (Hey, remember the Kizashi?)

Regardless, Suzuki says that the Authentics concept previews a C-segment vehicle for the Chinese market. A good move, too, since that segment has the highest volume in the Chinese market. (That's why automakers like Ford, for example, have more than one offering in the class.) If we're honest, the Authentics concept looks a bit "meh" for our tastes – there isn't a whole lot of emotion going on here with the design. Consider it a competitor for that spiffy new Ford Escort that also took the stage here in Shanghai.

We don't have any more details about the Authentics concept at the moment, but considering the fact that Suzuki has officially exited the US market, at least we don't have to worry about this thing showing up on our shores anytime soon.


Suzuki's C-segment sedan concept model AUTHENTICS will make its world debut at the 15th Shanghai International Automobile Industry Exhibition, which will be held from 20 – 29 April, 2013.

AUTHENTICS is a concept model presented to enter the C-segment sedan class, which has the largest volume in the Chinese automobile market.

The model expresses "Sporty x Elegant" with its long wheelbase and an unconstrained form with its overall height kept low, as well as its strong character line which gives a wind-cutting image along with a rich and fine curved surface.

Suzuki will make world premiere of the new GW250S, an additional spec of the on-road motorcycle GW250, which is being produced by Suzuki's joint venture in China, Changzhou Haojue Suzuki Motorcycle Co., LTD., and distributed not only in China but also in Japan, Europe, etc. By equipping a half-fairing, it gives a sportier image while increasing wind protection such as when riding on highways.

Other models to be presented at the exhibition are:

Reference exhibit of the SX4 (exhibited at the Geneva Motor Show)