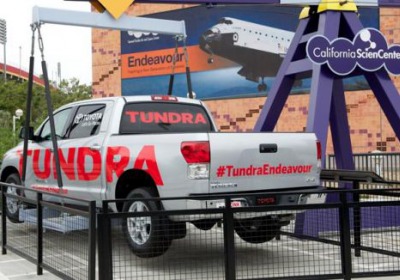 The idea of lifting a full-size pickup truck completely off the ground by hand might seem as likely as, say, said pickup truck towing a 150,000-pound space shuttle, but... hurray, physics! The same Toyota Tundra that towed the Space Shuttle Endeavour to its final resting place at the California Science Center is now on permanent display there as an exhibit that shows how a lever works.

Like all levers, this exhibit uses a fulcrum allowing people other than Superman to lift the 5,625-pound pickup (plus an extra 1,000 pounds for the rig). That's almost as impressive as the Tundra pulling 17 times its rated towing capacity back in October. Regardless, Toyota is once again cashing in on the publicity stunt and visitors to the science center get a live demonstration of a simple machine – we call that a win-win.

LOS ANGELES (May 31, 2013) – The California Science Center, in partnership with Toyota Motor Sales, U.S.A., Inc., unveiled the Toyota Tundra full-size pick-up truck used to tow the Space Shuttle Endeavour over the 405 Freeway Manchester Boulevard Bridge during its journey through Los Angeles and Inglewood Streets. The Tundra is on display as part of the Giant Lever Exhibit, located in the California Science Center/California African American Museum parking structure adjacent to the science center entrance. The unveiling commemorated Endeavour's last flight STS-134, which launched May 16 and landed in the early morning hours of June 1, 2011.

Taking part in the unveiling were Jeffrey Rudolph, president, California Science Center; Michael Rouse, vice president, Diversity, Philanthropy and Community Affairs, Toyota Motor Sales, U.S.A., Inc.; Lynda Oschin, chair of the Mr. and Mrs. Samuel Oschin Family Foundation; and former astronaut Garrett Reisman, Ph.D., who flew aboard Endeavour and rode in the Tundra at the time of the Endeavour tow.
Five year-old "future astronauts" Noah Lara and Samantha Comiskey, dressed in orange jumpsuits, demonstrated the science behind the Giant Lever Exhibit. A lever consists of a rigid beam pivoting on a fulcrum. By standing further away from the fulcrum, the two applied less force and were able to lift the Tundra full-size pickup truck.

"We are thrilled to unveil the Toyota Tundra as an addition to our Giant Lever Exhibit, as we commemorate the anniversary of Endeavour's last mission," stated Rudolph. "We are grateful for Toyota's longstanding commitment to science learning."

"Toyota has been a supporter and partner of the California Science Center from the very beginning," said Rouse. "We are honored to continue our partnership through this fun, interactive exhibit."