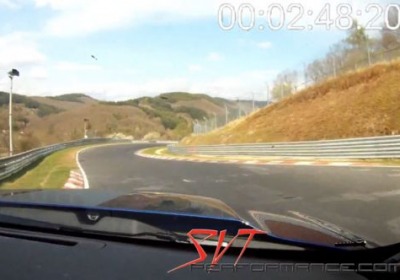 A couple of weeks ago we brought you footage and official times of the new Chevy Camaro Z/28 lapping the Nürburgring. With a 7:37.47 lap time, the Z/28 emerged as the fastest muscle car ever to lap the circuit. But what was missing from that picture was how fast the king of all Mustangs, the Shelby GT500, could manage to lap the Nordschleife.

Ford never released any information or footage of the GT500 on the Nürburgring that we were aware of – that is, until the guys at SVTPerformance.com put in a request for Mustang videos. Among the clips they received was never-seen, in-car footage of the Shelby GT500 lapping the circuit. And boy did it hustle.

Although not quite official, the video seems to show the GT500 lapped the venerated German track in a touch under 7:40. That would make it a tick or two faster than the Camaro ZL1 – but what of the Z/28? By Chevy's quoted time, the Z/28 is still faster than the GT500, but SVTPerformance suggests GM may have fudged the numbers a bit and scrubbed half a second or so off their lap time.

As the forum's administrator SID297 admits, judging lap times from video footage is not an exact science, so we'll leave final judgement up to you, the viewing public. But any way you slice it, these are some epically fast muscle cars. Check out the footage below to see for yourself.