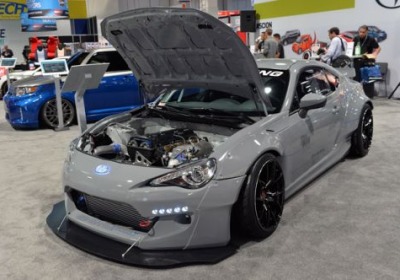 Scion brought four FR-S concepts to SEMA this year and one xB concept, while another three Scion tCs were brought to the show by three different shops that are competing in Scion's Tuner Challenge. The modified Scions range from mild to insane, and show how popular they are in the tuner world.

The Tuner Challenge teams brought unique creations to SEMA, after Scion gave each of them a tC, $15,000 and 90 days to modify it. At 11:00 AM on Wednesday, judges picked the Young Tea Scion Simpli-tC as the winner, the Walter Franco Scion L-DZ Concept got second, and third place went to the Josh Croll Scion WSD-tC. Check out the three videos below to watch the tC builds from start to finish.

Out of the FR-S concepts brought to the show, we're gravitating toward the GReddy Performance x Scion Racing Drift FR-S (top), which has the venerable 2JZ-GTE turbocharged straight-six engine in place of the flat-four that comes standard in the rear-wheel-drive coupe - ready to pump out 750 horsepower - and the Bulletproof FR-S Concept One, which features a striking, handmade wide body and a heavily modified, turbocharged flat-four that puts out 500 hp.

The Strictly Business Cartel Scion xB takes the term "people-mover" to another level with a stretched chassis that moves the rear doors back a few feet, limo-style. As we noted, there's some creative stuff at the Scion booth.

Take a look at the press release below for more information on Scion's SEMA cars, and be sure to head over to the photo gallery to see all eight of them.

In this ninth year of the Scion Tuner Challenge, three custom car builders each received a stock 2014 tC, $15,000 and 90 days to complete the project. The judging panel included representation from Super Street, a magazine dedicated to covering high-performance customized cars and lifestyle. Tea earned a $10,000 grand prize for his efforts.

"The design, labor and creativity that went into the Simpli-tC build stood out for our judges and will impress fans at the SEMA show and at home," said Steve Hatanaka, Scion marketing and special events manager. "All three builders took the 2014 tC in directions that will help inspire Scion owners to make their vehicles their own. There are no limits."

The recognition from judges thrilled Tea.

"It may have been a dash to the finish, but the car looks amazing thanks to the team's hard work," Tea said. "With the new styling, the tC was a great platform to take on this challenge, and it inspired our team to bring out a concept we believe in. Stay true to who you are."

Scion Unveils Trio of Tuner Challenge tCs Ahead of SEMA

TORRANCE, Calif., (Oct. 30, 2013) – The curtains came up Tuesday on the three Scion Tuner Challenge cars ahead of their Specialty Equipment Market Association (SEMA) Show debut in Las Vegas Nov. 5-8. The stars: three custom car builders representing tuner scenes in the East, the Pacific Northwest and Southern California. At the beginning of the competition, Scion gave each builder a stock 2014 tC plus $15,000 to design and modify the car within 90 days.

Josh Croll of Mertztown, Pa., converted his tC to a right-hand drive model, the first in the world. Diverse influences came together in the car with the flashy hot rod orange color, European clean lines and shape, and wide wheels for a proper stance. As the owner of Croll's Customs, Croll completed the work in-house.

"This tC is a modern day hot rod with clear Japanese roots," Croll said. "It has the uniqueness, style and power to win this competition."

Walter Franco of Seattle worked with DTM Autobody in El Monte, Calif., to create the sophisticated VIP look he envisioned. Franco, who owns a transportation lifestyle brand NAMSAYIN, brought in a luxury feel through a combination suede and leader interior with diamond stitching and pearl white exterior paint. He also put extra focus on the driver's experience through the audio system and performance enhancements, including a shot of nitrous for added power.

"We aimed to reach that next level within the VIP style with performance capabilities and a good sense of design cohesiveness," Franco said. "This build represents the new direction I want to bring to the industry and the skill represented here in the Pacific Northwest."

Many know Young Tea of Alhambra, Calif., as the co-founder of the Scion FR-S community FRS86. He and his team took on the work themselves to showcase that a garage-built car can earn respect at the track and be driven daily. The "Simpli-tC" concept aimed to keep the design cues of the tC while extending the fenders, adding a custom dual-outlet exhaust rear diffuser and including an air suspension system to lower the car for shows.

"The tC popularized the concept of a cost-effective and easy-to-modify coupe, and that principle inspired this SEMA build," Tea said. "We want to show people what you can build in the garage, and that you can be proud of your car."

All three competition cars will be judged by a panel that includes representation from Super Street, a magazine dedicated to covering high-performance customized cars and lifestyle. Scion will announce the winner at 11 a.m. on Nov. 6 during the SEMA show. The winner will take home a $10,000 grand prize.

"Showing off the three Tuner Challenge builds ahead of SEMA lets more Scion enthusiasts see the incredible creativity and craftsmanship that went into these tC vehicles," said Steve Hatanaka Scion marketing and special events manager. "We hope builders will be inspired by the versatility of the tC as displayed by our custom builders. Our panel will have a difficult job choosing the ultimate winner."


Take a Tour of Scion at SEMA

TORRANCE, Calif., (Oct. 30, 2013) – Performance, technology and the young entrepreneur influenced the Scion vehicles on display at the Specialty Equipment Market Association (SEMA) Show Nov. 5-8. The collection of five builds will be located at Booth 20313, alongside three 2014 Scion tCs competing in the Scion Tuner Challenge.

The non-competition Scion builds reflect diverse partnerships and the sustained enthusiasm for the FR-S across diverse types of drivers around the country.

- Bulletproof FR-S Concept One: Through a partnership with Bulletproof Automotive, this supercar concept features a carbon fiber interior, a widened, handmade body, a rebuilt 500 horsepower engine, an advanced turbo system and track-tuned suspension.

"The FR-S continues to be a SEMA favorite, and this year's builds take the sports car in every direction," said Steve Hatanaka Scion marketing and special events manager. "All the SEMA vehicles draw on the passions of our drivers. Urban dwellers, entrepreneurs and the high performance enthusiasts all will find a Scion to get excited about this year."