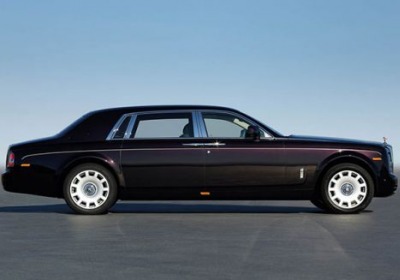 The wheeled monolith above is the 2013 Rolls-Royce Phantom Extended Wheelbase – a rolling demonstration of the real definition of "More." For that reason we can use it as a symbol of the firm's sales, which have not only achieved 'more' for the past three years but have also broken company records. Adding to its record-setting years in 2010 and 2011, the Goodwood-based carmaker moved 3,575 units, an increase of 38 over the year before.

The US retook its crown as the greatest consumers of Rolls-Royces, snagging it back from China. Other market movers were the Middle East, where sales rose 26 percent, Mainland Europe – the same place where mass-market makers are drowning in woe and inventory – that rose by 21 percent, and the Asia Pacific region and its 18-percent rise. Rolls-Royce is probably making more money on its cars, too, with bespoke uptake reaching 95 percent on the 10-year-old Phantom line and 73 percent for the Ghost line.

With a just-refreshed lineup and one or perhaps two more models coming, the indicators for more upward sales movement are strong, even if we don't know how soon the new models will arrive. For 2012, the brand that sells more cars above $200,000 than any other proved the saying that storms can't affect you when you live above the clouds. The press release below has more to say about the record year.

10.01.2013 -- Rolls-Royce Motor Cars today revealed record sales results for 2012. 3,575 cars were sold globally during the year, which represents the third consecutive record and the best sales result in the marque's 108-year history.

The record results were achieved despite a number of challenges in 2012. These included global business uncertainty and political unrest, preparations for the start of production of Phantom Series II and expansion works at the Home of Rolls-Royce in West Sussex to help the company satisfy increasing customer demand for Bespoke personalisation across the model range. Against this backdrop, Rolls-Royce has successfully retained its position at the very pinnacle of the ultra luxury market, maintaining segment leadership for motor cars selling above Euros 200,000. No other luxury brand sells as many cars in this segment as Rolls-Royce.

Strong sales growth was reported in many regions, with notable results seen in the Middle East (up 26%), Mainland Europe (up 21%) and Asia Pacific (up 18%). The United States and China remained the most significant individual markets for Rolls-Royce Motor Cars. A number of markets reported record sales, including Saudi Arabia (up 63%) and Germany (up 15%). As part of the company's focus on long-term sustainable growth, there was significant dealer development during the year. Thirty new or refurbished dealerships opened across the world, taking the total to over 100 for the first time in the company's history. Rolls-Royce also expanded into new markets, including Latin America, and sold motor cars in more than 40 countries worldwide.

"My aim at the outset of 2012 was another record. I am delighted to announce our sales for 2012 and to celebrate our 10th anniversary with an historic record result", said Torsten Müller-Ötvös, Chief Executive Officer, Rolls-Royce Motor Cars. "We had an outstanding year in spite of the challenges we faced, and Rolls-Royce now leads the ultra luxury market by some considerable margin. I applaud the Rolls-Royce workforce for their passion and commitment to this Great British brand and we can look forward to future success."

The company's portfolio includes the pinnacle Phantom family products – Phantom, Phantom Extended Wheelbase, Phantom Drophead Coupé and Phantom Coupé – and the Ghost family – Ghost and Ghost Extended Wheelbase. Demand for all variants was strong. Phantom Series II was unveiled in March at the Geneva Motor Show to worldwide acclaim and production has been increased at the company's Goodwood manufacturing plant to meet customer demand.

2012 also marked another record for the Rolls-Royce Bespoke personalisation programme, a service with Rolls-Royce's legendary hand-craftsmanship and attention to detail at its core. Nearly every Phantom family model (95%) and three out of every four Ghosts (73%) left the Home of Rolls-Royce with some element of bespoke personalisation. Sales were also enhanced by several exceptional bespoke collections in 2012, including Phantom Coupé Aviator, Art Deco, and Ghost One Thousand and One Nights.

The company celebrates its 10th anniversary at Goodwood in 2013. The first Phantom was presented to its owner at one minute past midnight on 1 January 2003. During the anniversary year, a major new extension to the Goodwood manufacturing plant will be opened to help the company meet increasing global demand for highly personalised Ghost and Phantom models.