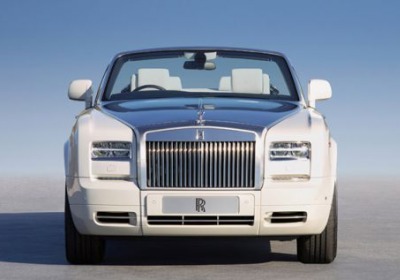 Ten years ago, Rolls-Royce opened its Goodwood manufacturing facility and handed over the keys to the very first Phantom. Back then, parent company BMW was cranking out Phantom sedans at the blistering pace of one unit per day. By the end of 2003, that number had tripled, and today, the Goodwood plant builds a total of 20 Phantoms in sedan, coupe, drophead and extended-wheelbase models during a single day's working hours. Originally, there were fewer than 400 workers on staff responsible for hand-building the big cruisers, but now the plant boasts over 1,400 craftsmen, with 100 of those positions added in 2012 alone.

Rolls-Royce boasts one of the lowest staff turnover rates of any brand in the industry, thanks in part to a successful apprenticeship and internship program, and the company notes 80 percent of its workers live within 15 miles of the facility. You can read the full press release on the 10th anniversary of both the Phantom and the Goodwood plant below.

Rolls-Royce Motor Cars today celebrates 10 Years of Excellence. On 1 January 2003 the Home of Rolls-Royce officially opened for business and the first car was presented to its delighted customer at one minute past midnight.

Described at the time as 'the last great adventure in automotive history', production of Phantom was initially one car per day, rising to three by the end of 2003. Today, with a product range spanning two model families (Phantom and Ghost) and six models, the company's craftsmen and women hand-build up to 20 cars each day. In 2011, Rolls-Royce celebrated a second consecutive sales record and the best result in the company's then 107-year history.

The response to the company's portfolio from customers, media and enthusiasts has been overwhelmingly positive throughout the company's first ten years of business. Each new model has been warmly welcomed and attracted worldwide acclaim, with the cars winning many design and luxury awards. The company's growing dealer network provides the same unique and effortless customer ownership experience across the world, with superlative customer service offered as standard. Whilst the company does not, as a rule, quote its customers, several have offered the following kind words:

"It's a seminal car. It changes the landscape" – Jack Corwin, California, USA

"I bought the Ghost as a gift to myself on my 40th birthday. The release date was 20 June; my birthday. I saw it as proof of my success, a way of marking a milestone in my life"– Zhang Yong, Beijing, China

"I feel like I'm at home when I drive my Ghost" – Simone Ceruti, Florence, Italy

"There will never be another Rolls-Royce" – Harold Tillman, London, UK

The unequalled quality of all Rolls-Royce motor cars built at the company's manufacturing plant has been recognised by the media from the very beginning. And bringing the story up to date, the launch of Phantom Series II in 2012, for example, was met with the highest acclaim:

"Phantom retains its unique position as a car that is beyond transport, and is theatre, event and heirloom"– Autocar

"Take it from me, there is still no peer, no rival to this magnificent mode of transport"– The National

"Good news for those who believe Rolls-Royce still makes 'the best cars in the world': the range-topping Phantom just got better, with the arrival of the Series II version"– FT How to Spend It

Starting with a workforce of less than 400, there are now more than 1400 people employed at the Goodwood-based manufacturing plant and head office. More than 100 new positions were created in 2012 alone. The company has invested heavily in future talent, with thriving apprenticeship, graduate and intern programmes. More than 80% of employees live locally (within 15 miles) and staff turnover is one of the lowest in the manufacturing industry.

The company makes a significant positive economic impact to the local area and, with more than 90% of cars exported, to the British economy. Investment has also extended to the site, with a major new extension to the manufacturing area currently nearing completion. This is to help the company meet further growth in worldwide sales and satisfy demand for highly personalised Ghost and Phantom models.

"Rolls-Royce is a great British manufacturing success story and I am very proud to celebrate 10 Years of Excellence," said Torsten Müller-Ötvös, Chief Executive Officer, Rolls-Royce Motor Cars. "The renaissance of the world's most famous automotive brand and the creation and development of the Home of Rolls-Royce has been an extraordinary and successful journey. I applaud the Rolls-Royce team at Goodwood and across the world for their passion and together we can look forward to the next ten years with great optimism."