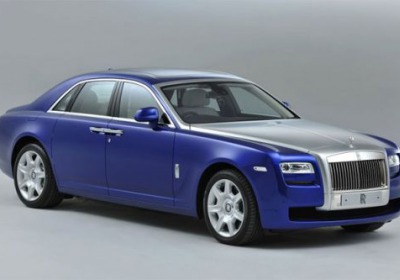 Befitting a creature called the Ghost, it was there and then it wasn't: Rolls-Royce dropped a few details and a picture of the 2013 Ghost, then removed all trace of it from the corporate site. The Internet can't keep a secret, though, so we have the goss on a carryover sedan with a few upgrades.

Next year's model takes its inspiration and several new tricks from the Ghost Six Senses concept revealed at the Beijing Motor Show earlier this year. The new natural grain leather, cross-banded wood veneers and "exciter" (high-range) speakers come straight from the concept. A new alloy wheel option is also available, but the single press photo doesn't show the same alloys used on the Six Senses car. Not shown in Beijing but on the menu for the coming sedan is Comfort Access, the ability to open the trunk by waving your foot under the rear bumper as long as you have the key on your person. It is the first Rolls-Royce to get the option.

The extended-wheelbase model jumps to $300,100 from $293,700 last year. A pittance, really, considering it only requires ticking three boxes on the options list to add another $91,100 dollars to the price. Feel free to consider your own options while you check out the press release below.

Upgraded amplifier and the addition of 'exciter' speakers elegantly housed in the leather headlining, ensure the audio system in Ghost richly fills the capacious rear cabin, raising the centre of sound closer to the passenger's ear.

Adding to the already vast array of existing comfort features, Ghost 2013 comes equipped with Comfort Access, a first of its kind convenience feature that allows the opening of the boot with an effortless foot movement. In case both hands are busy, the mere presence of the key in the vicinity of the car will prime the boot release mechanism, and open automatically once you place your foot underneath the centre of the rear bumper.

An additional forged alloy wheel option, which can be specified alongside a palette of 44,000 exterior paint options, completes the update.

The 2013 Ghost took inspiration from the Bespoke Ghost Six Sense collection and will commence production in the fall of 2012.