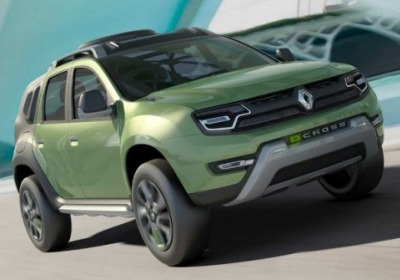 The São Paulo Motor Show continues to heat up and bring us interesting new vehicle unveilings. Next year, we may have to tough it out and trek down to Brazil for the 28th edition of the auto show. The most recent development from São Paulo is the Renault DCross concept. In what appears to be a gussied-up Dacia Duster, the DCross gets a bright green and matte black paint scheme, a raised ride height, roof racks and a spare tire atop the concept. If off-roading is your thing, the DCross, at the very least, looks the part.

Little else is given in details other than what we can gather from the photos. The concept, which catches the eye far more in the live shots than in the OEM image, was joined on the Renault stand by the Fluence GT, Clio 2013, and Captur concept.

Will this concept predict the future for a Renault SUV/CUV? We're not sure, but its bullish looks seem ready for the Dakar Rally. The 2013 edition of Dakar is not until May of 2013, but the DCross already has us thinking of the grueling endurance race, held Peru, Chile and neighboring Argentina. Read up on Renault's debuts from Brazil in the press release below.

-Renault set new records for growth in Brazil and has become the 5th-ranking brand.

For the 27th edition of the Salo Paulo Motor Show, Renault is unveiling 2 new models: Novo Clio and Fluence GT.

Novo Clio is the first vehicle in Brazil to feature the new Renault brand identity. Novo Clio is an evolution of Clio II and was adapted by Renault Design America Latina (RDAL) to match the needs of the local market in terms of design and personalization. Renault Technologies America (RTA) also contributed to Novo Clio's low fuel consumption (grade A in the Brazilian car energy labeling program). Novo Clio will be produced in Argentina.

Fluence GT is the first vehicle to bear the Renault Sport signature in Brazil. The sporty version of the sedan will be equipped with an 180hp turbo-compressed engine, a sport chassis and a sporty design that conveys the high-performance genes of the vehicle.

These two vehicles will be sold in Brazil starting in November.

Sales picking up the pace

This edition of the Sao Paulo Motor Show coincides with the best phase of Renault's history in Brazil: thanks to the success of Duster and Sandero, the brand has grown 36.2% compared to 2011, while the market grew 5.5% over the same period. Renault turned in the second-strongest improvement among all the brands in Brazil last year.

Renault is the 5th-ranking brand in Brazil, one of the three priority emerging markets for the Renault brand, along with Russia and India.
In 2011, Brazil became the Renault group's second-largest market (after France), thanks to a 21% increase in sales (compared to 2010) in a market that grew by 3%. In 2012, Renault Brazil is consolidating its position as the second-largest market of the Renault Group.
The network currently has 212 dealerships and should include 235 dealerships by the end of 2012, for a 15% year-over-year increase.

An expanding industrial base