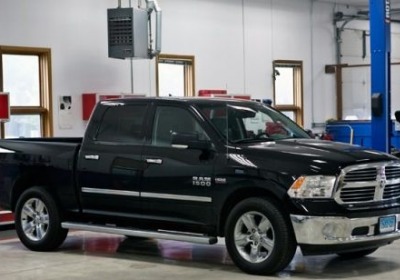 Vehicles that perform well in road tests by some of the most popular automotive publications, such as Car and Driver, Motor Trend and Automobile, don't always score well in in Consumer Reports' more regimented, practical test procedures, so the Ram 1500's climb to the top of CR's scoreboard is a boon for the well-received pickup truck, which CR also put on its "recommended" list.

To start off with, the freshened 2013 Ram 1500 has a lighter, stiffer chassis than before, and the four-wheel-drive Crew Cab that CR bought and tested performed flawlessly and achieved class-leading fuel economy (15 miles per gallon) with the 5.7-liter Hemi V8 – the most popular engine choice for the 1500 – and the new eight-speed automatic transmission. The unique-in-its-class rear coil spring setup endowed the truck with "one of the best rides of any pickup," CR reports. That helped it earn its class-leading road-test score of 78, well ahead of the nearest competition still in production, the Toyota Tundra (69) and the Ford F-150 (68). It's worth noting, however, that the Chevrolet Avalanche outscores the 1500 by two points (80), but production of that vehicle ends after the current 2013 model year.

About the only things the publication could find wrong with the truck were a heavy tailgate and a high step up into the cabin. Get ready for the next round later this summer when CR is finished testing the 2014 Chevrolet Silverado, which is doing well so far in the publication's tests.

To see what we think of the 1500, head over to our First Drive review of the Ram 1500 SLT with the Pentastar 3.6-liter V6, and feel free to take a look at the Consumer Reports press release below.

For 2013, the Ram got a lighter and stiffer frame, a revised interior with a new infotainment system, and updated powertrains. Consumer Reports tested a four-wheel-drive Ram 1500 Crew Cab, with the most popular engine option-the 5.7-liter Hemi V8-and the new efficient eight-speed automatic transmission. The combination delivers seamless power and still returns a class-leading 15 mpg overall in CR's own fuel economy tests.

The complete tests and ratings of the Ram 1500 appear on www.ConsumerReports.org. Updated daily, ConsumerReports.org is the go-to Website for the latest auto reviews, product news, blogs on breaking news and car buying information. Check out CR's ongoing Twitter feed at @CRCars.

The Ram 1500 earned a 78-point overall road test score. Other tested full-size pickups include, the Toyota Tundra (69) and the iconic Ford F-150 (68). Consumer Reports is evaluating the redesigned 2014 Chevrolet Silverado and will announce its findings later this summer. First impressions are that the Silverado is a well-rounded and refined truck that will strongly challenge the Ram in our Ratings. Ford's F-150 will be redesigned for 2015.

While the Chevrolet Avalanche currently outscores the Ram by two points, Avalanche production ended after the current 2013 model year.

Prior versions of the Ram have been reliable so Consumer Reports is Recommending the freshened truck. To be Recommended, a vehicle must perform well in CR's battery of tests, have average or better reliability in CR's Annual Auto Survey and perform well in government and industry crash tests.

The Ram delivers one of the best rides of any pickup, thanks to its unique coil spring rear suspension. It has a super-quiet, super-roomy crew cab, and the optional UConnect infotainment touch screen is one of the best in the business. On the downside, the step up to the cabin is very high, and-unlike some other pickups-the Ram's tailgate isn't damped or sprung, so it's heavy.

See also: 2013 Ram 1500 Black Express is midnight in the garden of good and evil, Chrysler recalling over 280k minivans because airbags may deploy on wrong side, Autoblog Podcast #339.