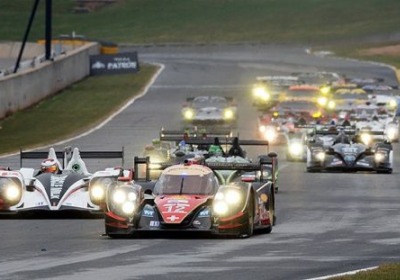 The 16th Petit Le Mans Powered By Mazda, in the final year of the American Le Mans Series presented by Tequila Patrón, was run on Saturday. Even though many of this year's championships had already been decided, the last ALMS race ever would be a 10-hour, 1,000-mile slog around Road Atlanta to get names in the record books and decide a few series trophies.

Since some of you will only get around to your TIVOs (or Fox Sports coverage) today, you should stop reading now if you don't want to know who did what...

After spending time away in the FIA World Endurance Challenge Series, Rebellion Racing returned to ALMS and repeated its performance from 2012, with Neel Jani putting the No. 12 Rebellion Timepieces/Lemo Connectors/Speedy Garage Toyota-powered Lola B12/60 on pole, along with co-drivers Nick Heidfeld and Nico Prost. It was Jani's fourth career ALMS pole, his first one coming at last year's Petit Le Mans. And just like last year, although it was a bit messier this time, he and his co-drivers would win the race.

Jani took pole just ahead of the No. 6 Muscle Milk Pickett Racing HPD ARX-03c Honda driven by Lucas Luhr, Klaus Graf and Romain Dumas. The Muscle Milk car had won eight races in a row coming into Road Atlanta, and in doing so claimed the ALMS P1 manufacturer and team championships, while Graf and Luhr claimed the driver's championship.

Changeable wet and dry conditions dominated the first few hours, along with incidents and retirements that would decide the race. Rebellion led the race from the start, with Muscle Milk close behind, until an hour in when Jani sideswiped the No. 52 PR1 Mathiasen Motorsports' Molecule ORECA FLM09 Prototype Challenge (PC) car driven by Dane Cameron as Cameron exited the pits. That sent the Rebellion into the pits first for repairs, and then again to serve a stop-go penalty for avoidable contact.

Muscle Milk took over the lead and put a lap into the Rebellion team, and looked like it had the pace to take a ninth consecutive victory. But five hours in, Dumas pulled the No. 6 car into the pits, and then had to retire with an overheating issue.

With Muscle Milk out, Rebellion was untouched for the rest of the race, leading for 228 of the 394 laps of Road Atlanta – Muscle Milk led another 158 of them – and taking victory by six laps over second place. There were two other runners in the P1 class, the No. 16 Dyson Racing Lola B12/60-Mazda suffering problems throughout the race and finishing 11th overall, 20 laps down, the No. 0 DeltaWing DWC13 Coupe failing to finish.

Ryan Briscoe brought the Level 5 Motorsports No. 551 HPD ARX-03b home in second with the help of co-drivers Scott Tucker and Marino Franchitti. The class win gave Tucker, the team owner, his forth-consecutive ALMS driver's championship – three in P2 to go along with a PC crown in 2010 – after sealing the team championship earlier this year.

He had to fight for it, though; Tucker entered the race with a six-point lead over Scott Sharp, driver in the third-placed No. 01 Tequila Patrón HPD ARX-03b of Extreme Speed Motorsports. Midway through the race his car was two laps down due to "minor dramas," and the sister No. 552 Level 5 car was the one challenging for the lead with Extreme Speed. Level 5, though, benefited from excellent pit stops throughout the contest, and a bad stop by Brabham in the last hour of the race helped the No. 551 Level 5 car rise from third to first place, finally beating Brabham by less than two seconds – only 1.394 of them to be exact. The No. 552 Level 5 car driven by Jonny Kane, Peter Dumbreck and Guy Cosmo came in fourth.

In the PC class, Dane Cameron was unable to convert his fourth consecutive pole position into a victory or a driver's championship for co-driver Mike Guasch. After Cameron was brushed by Jani early in the race, the No. 52 PR1 Mathiasen Molecule ORECA FLM09 had to pit for repairs and re-entered the race last in class, 20 laps down. They would finish fifth in class.

Corvette Racing had already claimed its tenth team and manufacturer championships in the GT class at the last race at VIR, but the driver's cup was still up for grabs and they wanted to do big business in the last outing for the Corvette C6.R. Qualifying was close, with five of the eleven entries – and at least one car from each of the five manufacturers – separated by a half a second.

The racing was also close for hours, with leaders dropping back after contact with other cars or mechanicals. Pole-sitter Matteo Melucelli damaged his Risi Ferrari in a scuffle with Jan Magnussen in the No. 3 Compuware C6.R, the No. 56 Team RLL BMW Z4 taking over the lead. Ryan Dalziel ran off the track and into the tire wall in the No. 91 SRT Viper about halfway in, the No. 4 Corvette C6.R was bitten by electrical gremlins. Seven hours in, Risi was back in the lead until Olivier Beretta ran into the wall trying to pass a GT Challenge car. The Risi team would recover to finish third.

That put the dark horse No. 17 Team Falken Tire Porsche 911 GT3 RSR into first, a team which had quietly climbed up the order from sixth in class on the grid. Drivers Nick Tandy, Wolf Henzler and Bryan Sellers held on to win the race, ahead of the No. 56 Team RLL BMW driven by Dirk Muller. The fifth-place finish of Magnussen and co-drivers Antonio Garcia and Jordan Taylor gave Magnussen and Garcia the driver's championship. It is the ninth time Corvette drivers have won the trophy since 2001.

In GTC, the No. 45 Porsche 911 GT3 RSR of Flying Lizard Motorsports driven by Nelson Canache, Spencer Pumpelly and Madison Snow won from pole to flag. They were followed by the No. 27 Porsche 911 GT3 RSR car driven by Andy Lally, Patrick Dempsey and Joe Foster. Flying Lizard also won the GTC team championship, but the driver's championship went to Jeroen Bleekemolen and Cooper MacNeil.

The Petit Le Mans will be back next year as well, but under new management now that the ALMS is officially dead. The Tudor United SportsCar Championship (TUSCC) officially begins in less than 100 days with the Rolex 24 at Daytona.