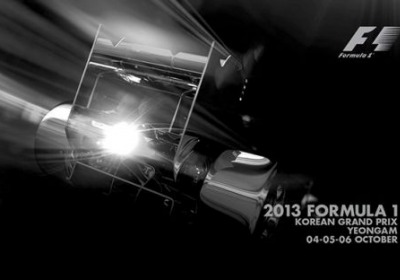 The end of qualifying for the 2013 Korean Formula One Grand Prix left us with five pairs: two chassis each from Infiniti Red Bull Racing, Mercedes-AMG Petronas, Lotus, Ferrari and Sauber. Yes, Sauber. The last time the Swiss team had two drivers in the top ten was Japan last year, when Kamui Kobayashi converted the grid spot into a podium.

But let's start at the front of the top ten, where Sebastian Vettel put his Red Bull on pole for the 42nd time in his career. He was followed by Lewis Hamilton in second place by two-tenths of a second, Mark Webber in the second Infiniti Red Bull, and Romain Grosjean in the Lotus in fourth. Out-qualifying teammate Kimi Räikkönen again, the Finn would line up in tenth. Nico Rosberg put the second Mercedes in fifth, Fernando Alonso got the first Ferrari into sixth ahead of teammate Felipe Massa, while Nico Hülkenberg led with the first Sauber in eighth, teammate Esteban Gutiérrez showing the promise he was hired for (okay, and his money) in ninth. Except they'd all move up a place because Webber had to serve his ten-place grid penalty after getting his third reprimand of the season in Singapore. That would get Sergio Perez in his McLaren into tenth. Yes, McLaren needed a grid demotion ahead to make it into the top ten.

It was an entertaining top ten that no one would have expected. When the red lights went out, we were treated to one of the most entertaining races of the year – it was Gangnam Style at 300 kilometers per hour.


This time, it was kind of entertaining even at the front. Vettel got a perfect start and led from the first turn, but Hamilton was fighting off Grosjean almost immediately and would lose second place before the lap was out. The first two corners passed without incident, with the first blowup of the day coming at Turn 3. Massa dove down on the inside and lost the back end on the inside curb under braking, spinning in the middle of the pack, tapping Alonso and clobbering the front wings of McLaren's Jenson Button and Force India's Adrian Sutil.

That shook the order up an iota or two, along with an early round of first pitstops after Button came out on the medium tire and set the fastest lap of the race. Good news for race fans, though, was that Vettel wasn't running away with it. Well, not by Infiniti Red Bull standards; he was only putting about .8 of a second per lap into the chasers instead of the seconds we've become used to.

The real battle was happening from sixth to ninth place, with a protagonist who'd be a factor through all 55 laps: Hülkenberg had got his Sauber into sixth and was keeping Alonso, Räikkönen and Webber behind. It seems the Sauber engineers have worked some incredible traction into the car, and Hülkenberg was always able to get enough pull out of corners to keep himself safe even at the end of long straights.

On Lap 27, the circus began. Paul di Resta – for the fourth time in four races – crashed out due to what looked like driver error. On Lap 28, Rosberg went to pass teammate Hamilton, whose tires were so bad he was putting in lap times that were worse than every other car but the Caterhams and Marussias, but just as Rosberg pulled out of Hamilton's slipstream, his entire nosecone came loose and dropped the front wing onto the track, where it showered sparks all over the front tires while Rosberg made his back to the pits.

On Lap 31, Perez's front right tire delaminated on the straight between Turns 2 and 3, leaving a tire carcass in the middle of the track and bringing out the Safety Car for four laps. It's thought that Perez had severely flat-spotted his tire during the previous lap when he locked up into a corner. Webber, Mr. Worst Luck Ever, who had made his way up to 5th from 13th on the grid had just pitted before the Safety Car period, but had to do so again just a lap later when he picked up a puncture.

At this point, Vettel was leading Grosjean and Räikkönen, followed by Hamilton and Hülkenberg. Hülkenberg passed Hamilton down the front straight on the restart. Then, at Turn 3, Sutil lost the back end of his Force India on the outside curb and spun into Webber, the impact hitting the oil lines along the right flank of the Red Bull and causing the car to go up in flames almost immediately. It took a while for the marshals to get an extinguisher on the rather large Red Bull barbecue, so the circuit fire chief sent a Jeep Grand Cherokee fire service truck onto the track to help the marshals before the Safety Car had come out – meaning we were treated to a big ol' SUV trundling down a flat-out straight on a live track, with cars coming around Turn 2 in the background. Race Director Charlie Whiting was not happy.

Just before the Safety Car came out again, Räikkönen passed Grosjean to take second place. The rumor after the race was that Grosjean had been told about the yellow flag at Turn 3 – this was before a full-course yellow had been issued – and slowed up a bit three corners beforehand. Räikkönen took advantage of Grosjean's "mistake" and passed him up the front straight, knowing Grosjean couldn't retake the place because of the yellow flag once they got through Turn 2.

The full-course yellow lasted five laps, at which time it was Vettel, Räikkönen, Grosjean. Vettel aced the restart again, Grosjean pleaded with his team to be let by Räikkönen, and Hülkenberg in fourth place held off Hamilton for 11 laps to the end of the race. Hülkenberg put in the drive of the day, never making a mistake, while Hamilton had to make sure he kept Alonso behind him during his attempts to get past Hülkenberg. At one point, Hamilton radioed to his team on the subject of passing the Sauber, "If you guys have any suggestions..."

But it was Vettel that won the race, ahead of Räikkönen, Grosjean, Hülkenberg, Hamilton, Alonso, Rosberg, Button, Massa and Perez. The victory means Sebastian Vettel has won six of the past eight races, and that puts him 77 points ahead in the driver's standings: 272 to second-placed Alonso's 195. The principle permutation says that if Vettel wins the next round in Suzuka and Alonso finishes worse than eight, the German will win his fourth World Championship. If Alonso finishes the race, though, it's unlikely he'll do so way back there; what's more likely is that he keeps Vettel from winning the championship in Suzuka, but only delays the result that everyone doesn't want to admit they expect.

Likewise, there are enough points left that Red Bull, with 408 points, could still lose the Constructor's Championship this year... but it would almost require them to sit out three of the final five races. Ferrari trails at 284 points, but the Scuderia is only one point ahead of Mercedes at 283. As with the Driver's Championship, can we just go ahead and say that the battle here is for second place? Can we all just admit that? Please?

The next race comes from Suzuka, Japan next weekend, October 13. We'll see you then.