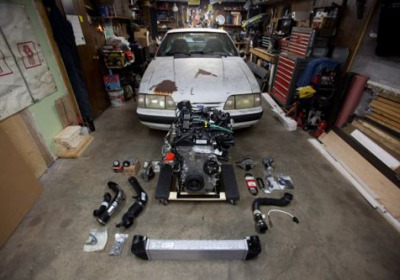 
There's an EcoBoost 2.0-liter turbocharged four-cylinder in there somewhere, and it's headed straight for Ugly Horse.

For the second time in my life, I'm staring at an engine in the back of a truck with no concept of how to get it safely into the garage by my lonesome. The first time this happened, I dragged home a $300 International 345 V8 in the back of my Scout Terra only to discover that the bounds of my manliness terminated well before my ability to muscle that 800-pound cast iron block out of the pickup bed.

Now you know the story of how and why I bought my first engine puller.

Some six years later I'm playing out the same dance, though a Ford F-250 has stolen the Scout's starring role, and there's a towering pallet of thick cardboard boxes in place of the old International mill. It's not that the boxes are particularly heavy. They're just stacked too high to get in the garage. Each one is emblazoned with a massive Ford Racing Performance Parts logo and wrapped in enough plastic to keep both prying fingers and the persistent rain at bay. Good thing, too. There's an EcoBoost 2.0-liter turbocharged four-cylinder engine in there somewhere, and it's headed straight for Ugly Horse.

Project Ugly Horse is an ongoing series. Need to catch up? You can find the previous articles here.

Even before I laid hands on this car, the plan was to pull the naturally aspirated 2.3-liter four-cylinder engine from behind the headlights and replace it with a modestly breathed-on turbocharged 2.3-liter from a 1987 Ford Thunderbird Turbo Coupe. The reasons were simple enough. I had the turbo engine in hand, everything bolts up just fine and the 2.3T can be persuaded to make V8-besting power with just a little convincing. And then there are my personal proclivities. As much as I love the fiendish thrust of a V8, I was brought up behind the thrashing pistons of a four-cylinder.


I was raised knowing there is a replacement for displacement. It's called engineering.

Long before I was a happy accident, my father spent most of his driving youth and a small fortune on a quest to create a naturally aspirated version of the high-strung four-pot that pushed the IMSA Mustang GTP to glory in the early '80s out of his '79 notch. I didn't grow up listening to tales of big-block prowess. My bedtime stories glittered with chronicles of synchronizing twin 35mm Webbers, of shaving a Ford Racing dual overhead cam head until the first whispers of the manifold thread chases shone through the bare aluminum and putting a knife edge on a balanced crank. Grumpy Jenkins was no hero of mine. I was raised knowing there is a replacement for displacement. It's called engineering.

Fast-forward a couple of decades, and I'm busily doing my best to prove just how little a Bowman can learn from history.

For reasons that will forever remain a mystery to me, the good people at Ford Racing Performance Parts have kept a close eye on my beater Mustang throughout its progression from immobile eyesore to immobile eyesore with an independent rear suspension. A few months back, they reached out to me with a few questions. What were my plans for the car? What engine was going under the hood? More importantly, did I want to try my hand at putting an EcoBoost 2.0-liter four-cylinder from the ludicrous Focus ST in the engine bay instead of the ancient 2.3T?


This whole adventure has suddenly gotten more involved, more complicated and more expensive than I ever intended.

Ask any five-year-old girl if she wants a pink pony for Christmas and she's bound to exhibit more composure than I did when responding to that last one.

There are, of course, hurdles to be overcome. The least of those begin with the fact that the engine sits in a transverse configuration in the Focus, while the Mustang relies on a longitudinal layout. The EcoBoost is also nearly six inches longer than the old 2.3, which means I'll either be making room in the firewall or moving the engine even further out over the nose. There are engine mounts to consider, the fact that the modern engine relies on a throttle by wire system, which transmission will work with the lump and, perhaps most dauntingly, what sort of engine control I can use to get a fully modern, direct-injection engine to play nice with a dilapidated Fox Body. This whole adventure has suddenly gotten more involved, more complicated and more expensive than I ever intended.

So why bother? The EcoBoost 2.0 is nothing short of a wonder. At a scant 291 pounds, the engine delivers a heady 252 horsepower and 271 pound-feet of torque in stock configuration. That means that as it sits on my garage floor, this engine is 75 pounds lighter than the old turbo 2.3 while churning out a full 62 more horsepower. Not impressive enough for you? In 1989, the Mustang GT relied on a cast iron 5.0-liter V8 to get Vanilla Ice around town in style. The EcoBoost not only yields an extra 27 horsepower over that big mill, but tips the scales at a batty 252 lbs lighter.


I may not be simplifying anything, but I'm sure as hell adding lightness.

I may not be simplifying anything, but I'm sure as hell adding lightness.

Turn an eye to the aftermarket and tuners are already squeezing well over 300 horsepower from the little 2.0, giving the engine a weight-to-power ratio of better than 1 lb/hp. Crafty tricks like sodium-filled exhaust valves help withstand higher internal temperatures while an exhaust manifold integrated into the head decreases the amount of time it takes to get the engine up to optimum operating temperature. It also makes the whole package incredibly compact.

This swap is not going to be easy, and it takes this project in an entirely different direction from the low-buck bruiser I had first imagined. But if I pull it off, I'll be the first person on the planet with an independent rear suspension Fox Body powered by an EcoBoost.


I backed the F-250 up to the garage door. The tower of boxes stood nearly five feet tall, and the extra height of the pickup bed meant I couldn't actually move the truck into the garage to get everything unpacked. I unfolded my pocket knife and began carefully cutting the plastic away, trying not to become overwhelmed at the staggering array of components required to keep this little lump humming. They poured from each box until I finally got to the EcoBoost, packed up in an honest-to-God crate. With apprehension and excitement doing the two-step in my gut, I pulled off the last sheet of plastic, hitched it to the engine puller and welcomed it to the garage.

Standing there with the carnage of cardboard, plastic and two by fours around me, I called up my dad. I wanted to know if his '79 was worth the effort. He paused for a second.

"I was a young man with a check book, and I was very stupid."

See? We're totally different. I have a debit card.

Project Ugly Horse is an ongoing series. Need to catch up? You can find the previous articles here.