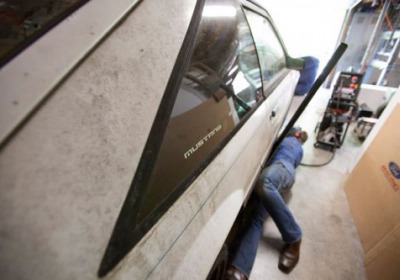 One Step at a Time


Nearly every flavor of exotic driveline has been shoved into the ubiquitous Ford at some point or another.

Chuck Schwynoch had been patiently listening to my ramblings on the other end of the phone for a solid half hour. I'm not too big of a man to know when to ask for help, and at this point, I desperately needed some assistance. The truth is, working on a machine like a Fox Body Mustang is as easy as breathing thanks to the wealth of information available on the web. Nearly every flavor of exotic driveline has been shoved into the ubiquitous Ford at some point or another, and odds are the sorry souls behind those builds shared the highs and lows of their torment with the internet community.

That is, unless you're trying to drop an EcoBoost 2.0-liter four-cylinder behind the clouded headlights of an '89. Then you're kind of on your own.

As the CEO of Maximum Motorsports, Schwynoch knows a thing or two about making old ponies fast around a road course. He and his team run an active research and development program committed to squeezing precious seconds from track-built Mustangs, and I was hoping that if anyone could help me navigate the vagaries of planting my modern engine into my old Fox, it was him. The fact that he had neither laughed me off nor hung up entirely seemed promising.

Project Ugly Horse is an ongoing series. Need to catch up? You can read all of the previous posts here.

The Fox Body chassis boasts all the rigidity of a square of Charmin.

"Well, before you do anything, the first modification you should make to the car is installing a pair of subframe connectors," Schwynoch said.

I kept the part about the five-speed conversion, independent rear suspension swap and Mach 1 brake install to myself for the moment while Schwynoch extolled the virtues of welding in a pair of connectors. You see, the Fox Body chassis boasts all the rigidity of a square of Charmin. There's technically a "frame tube" at each corner behind each front wheel and ahead of the rear rollers, but they don't run the length of the car. There's nothing but thin, mostly flat sheetmetal between the nose and the tail.

The result is some pretty pathetic rigidity. Over time, a little bit of track use can cause stress cracks in the chassis and result in a car with the driving dynamics of a wet piece of Charmin. The issue is a known chink in the Fox Body armor, and plenty of companies make solutions in the form of subframe connectors. Effectively bent square tubes, the connectors marry the front and rear factory frame tubes. BBK, Steeda, Kenny Brown and others all turn out their own take on the best way to join the nose and tail of Fox Body and SN95 Mustangs.

Maximum Motorsports offers two options when it comes to connectors: standard and full-length. The company says the full-length variant is 95-percent stiffer than its standard option thanks to taller tubing. I probably don't need to tell you which route I took. The bits use 1.5-inch by 2-inch tube with .083-inch wall thickness, and you can specify bare steel or black powder coating for better rust prevention.


The only way to get better is to actually screw up a few times. That, I can most certainly do.

Schwynoch and I struck a deal: He and his team would help develop and engineer a set of engine mounts that would place the EcoBoost 2.0 where it needs to be in the engine bay in exchange for me playing guinea pig. If everything worked out, they could then sell a kit to anyone else interested in hoeing the same row. They'd also cut me a deal on other parts to help speed along the build so they wouldn't have to wait for me to sell plasma every month to cover the cost of going faster. I ordered up a set of powder-coated full-length subframe connectors and got to work securing the information Maximum needed to get started.

To be completely honest here, the full width and breadth of my welding experience spans across two very simple projects. But, as with most endeavors, the only way to get better is to actually screw up a few times. That, I can most certainly do.


After getting the car on jack stands, I set about test-fitting the passenger-side connector. The instructions clearly warn that if anyone has incorrectly used a jack on the stock frame tubes at any point in the vehicle's past, there's a good chance you'll need to bend the connectors by using a shop press in order to get everything to fit nicely. My frame tubes looked as if someone had used a jackhammer instead of a floor jack on them, and sure enough, my first test fit revealed that nothing fit accordingly.


This work was going on upside down, in the dark and with plenty of old, bent sheetmetal. "Nightmare," is a word I'd use.

I bought an el-cheapo press on sale from Harbor Freight, assembled the machinery and began carefully reversing the factory bend as instructed. Of course, the instructions also caution you against bending the tube too far. What was it that I just said about screwing up?

After finding out the hard way that flattening the bend too much is just as bad as not enough, I reversed my damage with a little help from a floor jack once it was clear everything would fit where it belonged. I marked all my future weld points and brought the areas on both the connector and the car to bare metal with a sanding disc. After shooting everything in weld-through primer, I started my do-it-yourself welding lessons.

Except, unlike my previous projects, this work was going on upside down, in the dark and with plenty of old, bent sheetmetal. "Nightmare," is a word I'd use. I've read that good welds should look like a stack of nickels laid over on its side. I wanted nickels. What I got was melty Dippin' Dots with similar holding power. Unhappy with the first run, I removed the connector, ground off my old welds, fiddled with the welder settings and gave it another go. The second pass was no more attractive, but significantly more effective. I can live with that.


By the time I got to the driver's side, my welds were looking cleaner and cleaner. After wrapping the hard brake and fuel lines that travel along the factory frame rail with heat wrap to prevent any unexpected explosions, I finished sticking everything in place and hit my more horrible welding atrocities with a grinder to smooth it all out. I finished up by shooting both connectors with white Rustoleum to further prevent corrosion.

Do the connectors work? With the car effectively immobile, it's impossible to say what sort of impact they'll have on handling or durability. We'll have to wait until the car is up and moving to learn more. While I was worried about reducing ground clearance, it looks like the connectors don't hang any lower than the factory exhaust, which is a good thing. The parts will set you back $144.97 for the bare metal and $174.97 for the powder coated variant, and while the powder coat finish is nice, you'll spend just as much time grinding down to bare metal to prep for welding as you would painting the parts to begin with. They do offer the peace of mind that comes with knowing every last nook and cranny is protected from oxidization, however.

Meanwhile, the guys at Maximum Motorsports are busy working to plop a 3D model of the EcoBoost into a scan of a Fox Body engine bay. From what I hear, there may be some firewall massaging in my near future.

Full Disclosure: I approached Maximum Motorsports for help installing the EcoBoost 2.0-liter engine. The company has offered to partner with Autoblog on this build in the form of knowledge, engineering expertise and discounted parts. I have accepted that partnership under the agreement that doing so will in no way color my impressions of their products.