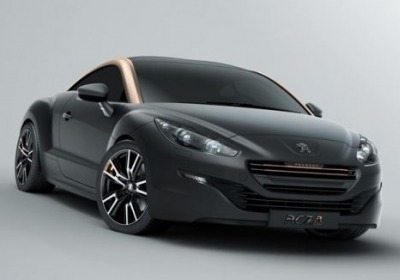 What you're looking at here is the most powerful production car Peugeot has ever created – the RCZ R, set to make its debut at the Goodwood Festival of Speed in July. The French automaker showed off a concept version of this hotter R model at the Paris Motor Show last year, and the actual road-going car will be available for purchase toward the end of 2013.

Under the hood is a 1.6-liter turbocharged inline four-cylinder engine good for 260 horsepower, and Peugeot says the car "promises intense dynamic sensations from the legacy of its race-bred experiences." This evidently means the car will have a unique suspension setup, a specific wheel design and a new Torsen limited-slip differential to keep those front rollers in check.

In addition to a show car, Peugeot will drive a RCZ R during the Festival of Speed weekend, with Bradley Philpot – the man who raced the company's 208 GTi in the recent 24 Hours of Nürburgring event – at the helm.

Scroll down for the official details in Peugeot's press blast.

- It will have 260bhp at its disposal from its 1.6-litre THP turbocharged engine

The RCZ R is the culmination of an evolutionary product journey that started with the original RCZ Concept that quickly made it into production, then into the three-times class-winning Nürburgring race car that inspired the road-going RCZ R. The RCZ R Concept previewed the evolution at the Paris and Geneva Motor Shows – shown with a matt black and copper livery that heralds the spiritual stance of a road-going RCZ R.

The road-going RCZ R utilises a more powerful 1.6-litre THP engine with 260bhp, making it the most powerful production model in Peugeot's history. Its efficiency will be a benchmark with power/capacity among the highest in the world for production vehicles at over 160bhp/litre with CO2 emissions targeted at just 155g/km.

It also promises intense dynamic sensations from the legacy of its race-bred experiences, with a bespoke suspension set-up, a specific and distinctive wheel design, combined with a Torsen®limited slip differential to harness the huge reserves of power and torque available.

Two red RCZ Rs will be displayed for the first time in public: on the Peugeot stand and shown performing dynamically during the Festival of Speed weekend, driven by the UK Peugeot 208 GTi Ambassador, Bradley Philpot – a finalist in the recent Nürburgring 24-hour race that saw three Peugeot 208 GTi cars win their SP2T class.

The Peugeot signature 'Motion and Emotion' is being perfectly expressed at this year's Goodwood Festival of Speed as the brand continues on its journey upmarket.

The reveal of the RCZ R is timely ahead of its launch at the end of the year. While the Goodwood Festival of Speed this year celebrates its 20th anniversary, it is also the case that as the gates to the Festival open on 12th July, it is the very same date 100 years ago that Peugeot demonstrated its performance prowess by winning the French Grand Prix, coming first and second.

Peugeot has a rich and illustrious history for compact, durable, highly-efficient engines that have powered its products, notably its cars and competition vehicles, to great success, and it is appropriate that the brand's most powerful road car – the RCZ R – has its international debut at this year's Goodwood Festival of Speed.