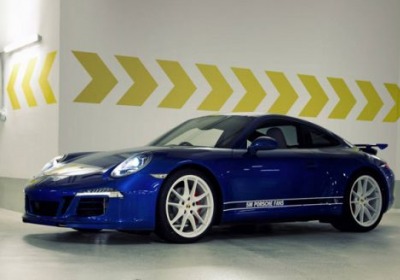 Porsche's Facebook fan base appears to be accelerating as quickly as the cars it builds. The German automaker has just unveiled a special 911 Carrera 4S designed with crowdsourced input as a way to thank its five million Facebook fans.

The 911 features special Aquablaumetallic paint from Porsche Exclusive, contrasting 20-inch white Carrera S wheels and pinstriping, along with an aero package including a fixed rear wing. Inside, there are unique backlit sill plates and the obligatory dashboard engraving that says "Personally Built by 5 Million Porsche Fans."

As a way to turn at least one virtual thumbs up into its more meaningful physical-world equivalent, Porsche is holding a contest to win the chance to drive the car at Britain's Silverstone racetrack – and bring a friend – and nine lucky runners-up will win 1:43-scale models of the 911. If you want to enter the contest, click here.

One-off Facebook "thank you" creations are nothing new for Porsche – back in February of 2011, it celebrated its first million Likes with a signature-laden 911 GT3-R Hybrid, and a year later, it observed its two-millionth with a Cayman S plastered with fans' faces. That was barely a year and a half ago, and Porsche has more than doubled its digital fans since then – in fact, it's up to 5.8 million Likes. Could it catch Ferrari? The Italian automaker counts 12 million fans in its stable, but it doesn't appear to be accelerating as quickly...