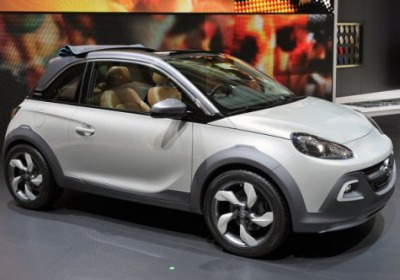 The Opel Adam, the microcar of General Motors' European subsidiary, has seen its sales cool significantly since it first hit the market in the United Kingdom and Europe, but a push is reportedly under way that just might be enough to get the stylish, little car moving again.

Using the Opel Adam Rocks Concept as a template, Opel will ruggedize the Adam, so that it might compete with the growing herd of city cars that sport SUV styling, like the Volkswagen Cross Up and Fiat Panda 4x4, according to a report from Automotive News Europe. Sporting a bumped-up ride height and tougher body work, it's a dedicated soft-roader, but will freshen the Adam's lineup and, hopefully, broaden its customer appeal.

The Adam Rocks, according to IHS Automotive analyst Ian Fletcher, should also make some more coin for GM's struggling European arm. "Automakers are happy to meet demand for SUV and crossovers as the customer pays a premium," Fletcher told ANE. And although the Rocks might have been planned from the start as a production vehicle, the timing, with the Adam's sales slowdown, doesn't seem like a coincidence.

The other idea we can draw from the Adam Rocks is that the SUV variant might just better the Adam's US business case. GM higher ups have hinted that they want the small Opel in the US, and we could certainly see the Adam Rocks slotting in below the already tiny Buick Encore. The question is, would Americans be receptive to a Buick-badged, Mini Hardtop-sized vehicle with SUV cues? Would it make more sense as a Chevy? Let us know what you think down in Comments.