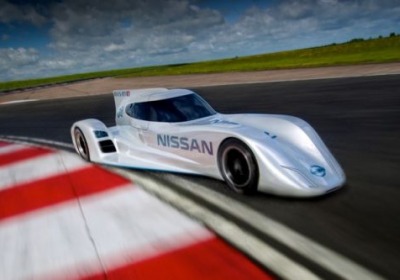 Nissan has announced plans and details around its upcoming all-electric racing car, the ZEOD RC. The Zero Emission On Demand Racing car is said to be capable of a top speed in excess of 300 kilometers per hour (186.4 miles per hour), is shaped a bit like the closed-cockpit version of the DeltaWing (albeit, to our eyes, better looking) and will make its debut in 2014 at the 24 Hours of Le Mans. This weekend, visitors to the race will have the opportunity to view the prototype near the Circuit de la Sarthe.

Nissan's ZEOD RC has been invited by Le Mans organizers to compete as the Garage 56 entry in next year's race; that's essentially a spot on the grid held for vehicles with new and/or cutting edge technology.

Short of announcing a partnership with Michelin to develop tires for the EV racecar, however, Nissan is mum on any kind of battery or motor specification for the ZEOD. The press release (below) offers a sense that the Nissan and Nismo teams have still got a lot of work to do before the 2014 race. Ben Bowlby, designer of the ZEOD RC, says "We have many options to consider and test. The test program is part of a longer term goal of developing a system and a set of rules for this type of technology in partnership with the ACO that would be best suited to competing at the highest level of this sport."

The ultimate goal of the ZEOD RC program, in terms of racing at least, is to sort out the feasibility of a LM P1 all-electric class for future Le Mans racing. Continue on below for more information, as well as a video about the ZEOD RC project.

Nissan ZEOD RC will utilize the same lithium battery technology as used in the award-winning Nissan LEAF
The Nissan ZEOD RC will achieve speeds in excess of 300km/h
Multiple electric drivetrain technologies to be tested before racing in 2014 Le Mans 24 Hour and assesed for potential in LM P1
Nissan again at the forefront of Zero Emission and battery technology
LE MANS, France – Nissan today unveiled the groundbreaking, innovative ZEOD RC - the world's fastest electric racing car that will reach speeds of more than 300km/h with electric technology at the Le Mans 24 Hours.

The ZEOD RC (Zero Emission On Demand Racing Car) will make its race debut at next year's Le Mans 24 Hour. The global leader in electric vehicles for the road, Nissan will trial variants of new electric drive train technologies as part of its intended future return to LM P1 competition to challenge for overall victory at the world's most prestigious endurance race.

Nissan's invitation from the Automobile Club de l'Ouest (ACO) to compete in the 2014 Le Mans 24 Hours was announced by Nissan Chairman and CEO Carlos Ghosn in Japan in February. The car will compete under the ACO's "Garage 56" entry – an additional spot on the grid for vehicles that showcase new and innovative technology.

Run as a Nissan / NISMO full factory international program with input from Japan, Europe and the U.S., the Nissan ZEOD RC design team is headed by Ben Bowlby who has been newly appointed as Nissan's Director of Motorsport Innovation and previously worked on the Nissan DeltaWing program in 2012.

While the car will not race until next year's Le Mans 24 Hours, Nissan today kicked off a unique aspect of the program – race fans getting the chance to unveil the car in the public area of the Circuit de la Sarthe. Nissan intends to draw back the curtain for fans across the globe to provide continued updates via its international partnership with YouTube and its NISMO.TV channel.

"Nissan has become a global leader in the development of zero emission automotive technology, and the Nissan ZEOD RC will allow us to further develop those capabilities using the toughest endurance race in the world as a mobile test bed to test the potential of our planned LM P1 power train," said Andy Palmer, Executive Vice President and Executive Committee member at Nissan Motor Company Limited.

"The Nissan ZEOD RC is a natural progression that follows on from the development of the Nissan LEAF road car and the LEAF RC race car prototype. The technologies developed through the ZEOD RC program will form part of future innovations for Nissan road cars.

"Nissan is already a global leader in the sale of all-electric cars and we're eagerly awaiting the opportunity to showcase the lessons learnt with the development of battery technology in the world's oldest, toughest and most high profile endurance race.

"The ZEOD RC program is designed to develop multiple technologies to evaluate how they could be used for a future LM P1 class return of Nissan at the Le Mans 24 Hour. There are multiple options we are investigating. A Zero Emission on Demand option where the driver can switch between electric and petrol-powered drive is a future direction for road cars, so that will be tested in addition to pure electric power and other new technologies that we still have under development.

"As no other manufacturer is using electric battery technology in endurance racing today, Nissan is innovating again and this will provide us with significant amounts of data and information to evaluate potential powertrains for future sportscar programs and allow us to continue as the leader in Zero Emissions technology on the road."

Nissan launched the Nissan LEAF RC in 2011 – a racecar prototype powered by the same 107-hp electric motor that is used in the road car.

While current battery technology does not provide the energy storage capacity to race a solely electric Le Mans prototype, Nissan ZEOD RC designer Ben Bowlby believes the development of the car will be an important step in the "electrification" of the racecars of the future.

"Developing a car like this provides an incredibly challenging test bed for what could be highly effective options for road cars of the future. Throughout the next twelve months we will be testing multiple drive train options in an extensive test program," Bowlby said.

"We have many options to consider and test. The test program is part of a longer term goal of developing a system and a set of rules for this type of technology in partnership with the ACO that would be best suited to competing at the highest level of this sport.

"Nissan is a leader in electric vehicle technology for the road, now we want to take those lessons learnt and utilize that knowledge base in the development of the new race car.

"Our design team on the Nissan ZEOD RC program has concentrated heavily on packaging and aerodynamic efficiency that will not only provide extreme performance but high levels of energy efficiency – the goal for all global automakers.

"A large part of our work in the coming months is to discuss with the ACO future opportunities for the 'electrification' of the Le Mans rules in the future and work towards delivering appropriate technology. Garage 56 is a bold move by the ACO to showcase Innovation and allow testing of untried components and systems for future competition use. To this end they are the most forward thinking promoter in Motorsport today."

Nissan will partner with French tire manufacturer Michelin to produce tires for the new prototype. Nissan previously joined forces with Michelin on the Nissan DeltaWing program. The Clermont-Ferrand-based manufacturer has an enviable record at the Le Mans 24 Hour, winning the past 15 consecutive races overall.

The Nissan ZEOD RC will make its testing debut later this summer. Nissan's assault on the 2013 Le Mans 24 Hour will again target victory in the P2 class with 15 of the 22 entries powered by Nissan. In the opening rounds of the 2013 FIA World Endurance Championship, Nissan has dominated, taking victory at Silverstone and Spa-Francorchamps.