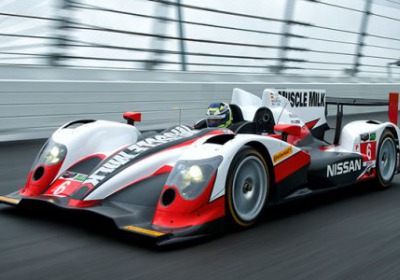 Muscle Milk Pickett Racing, formerly powered by Honda to two consecutive American Le Mans Series championships, is now officially powered by Nissan. The Japanese automaker's return to the top tier of US sports car racing comes with Nismo factory backing of the Muscle Milk entry in the newly created TUDOR United SportsCar Championship. Those with long memories will recall that Nissan walked away from America's then top-flight sports car series, IMSA, more than 20 years ago, having won 33 races, three manufacturer titles and four driver's titles from 1988 to 1991.

The ORECA 3 racecar's reveal also marks the introduction of Nismo Global Exchange drivers to the team. Alex Brundle, who drove for Nissan-powered OAK Racing last year in the FIA World Endurance Championship, will join Lucas Luhr and Klaus Graf at the Rolex 24 Hours of Daytona. It's his first time in a major US event, but having finished second in the WEC and in the LMP2 class at Le Mans last year, he's no novice. Nismo drivers will also contest the 12 Hours of Sebring and Petit Le Mans.

The No. 6 Muscle Milk entry will be hitting the track with the other competitors this weekend during the "Roar before the Rolex 24," with the race itself happening on January 25-26. You can read more about what's coming in the press release below.

NASHVILLE, Tenn. Jan. 3, 2014 – Nissan aims to return to its glory days of sports car success from the late 80s/early 90s with Muscle Milk Pickett Racing joining forces with the Japanese manufacturer as its official partner team.

As part of the NISMO Global Driver Exchange, racers from Nissan's squad of international drivers will compete alongside Muscle Milk Pickett Racing's Lucas Luhr and Klaus Graf. Luhr is no stranger to Nissan colors – winning the GT1 World Championship aboard a Nissan GT-R with Michael Krumm in 2011.

Nissan P2 World Endurance Championship regular Alex Brundle will join the team for the Rolex 24 at Daytona – the young British driver aiming to follow in the footsteps of his father Martin Brundle who won the American round-the-clock endurance classic 26 years ago in 1988.

The Rolex 24 at Daytona will be Brundle's first opportunity to contest a major U.S. championship event. The second-generation racer drove for Oak Racing in 2013 in the FIA World Endurance Championship – finishing second in both the championship and at the 24 Hours of Le Mans in the LM P2 class.

Launched last year, the NISMO Exchange provides opportunities for drivers in the Nissan "family" to contest major motorsports events across the globe.

The Nissan-powered Muscle Milk Pickett Racing ORECA 03 will hit the track this weekend at the "Roar before the Rolex 24" – the traditional pre-season test prior to the Rolex 24 at Daytona. The 2014 TUDOR United SportsCar Championship debuts at Daytona on January 25-26.

DARREN COX
NISSAN GLOBAL MOTORSPORT DIRECTOR
"We're glad to welcome Muscle Milk Pickett Racing to the Nissan family and look forward to having our official drivers learn from such a successful team.

"Greg Pickett and his team have achieved incredible results in recent years and having them as part of the NISMO Global Driver Exchange program will be an outstanding opportunity for our drivers.

"It is also great to again work with Lucas Luhr who won the GT1 World Championship with Nissan with Michael Krumm back in 2011. Lucas and Klaus Graf have enjoyed amazing success in the U.S. in recent years and I'm looking forward to seeing them continue that run with Nissan power in 2014.

"We are also very proud to have brought Nissan back to the forefront of U.S. sports car racing. Our company has an incredible pedigree dating back to the old IMSA championship and I'm certain Nissan and NISMO will add to that history in the coming years."

GREG PICKETT
OWNER – MUSCLE MILK PICKETT RACING
"We're extremely pleased to become one of Nissan's partner teams and to have them as part of the Muscle Milk Pickett Racing family.

"Nissan are proven race winners throughout the world and together we want to build a strong relationship that will help us continue the success that we've both come to enjoy. We're excited to not only have our prototype be powered by Nissan but to also be involved with them at a deeper level.

"Nissan has developed a great initiative with their NISMO Global Driver Exchange program and have a lot of young talent that we look forward to joining us throughout the season, starting with Alex Brundle at Daytona.

"I'm anxious to see Alex behind the wheel of our Muscle Milk ORECA/Nissan and I'm confident he will fit right in just fine with Klaus (Graf) and Lucas (Luhr)."

ALEX BRUNDLE
DRIVER – MUSCLE MILK PICKETT RACING
"I am excited to go over to Daytona and race in the Rolex 24. The chance to fight for overall victory with Muscle Milk Pickett Racing and Nissan is a fantastic next step in my career.

"I am delighted to be finally getting the chance to compete at an event I have aspired to contest. I would like to say thanks to Darren Cox of Nissan and Pickett Racing for giving me that opportunity.

"Muscle Milk has a tremendous record in American sports car racing so to have the chance to join such a prestigious American team is excellent. I'm looking forward to making the most of it.

"Klaus and Lucas have driven in the American series for a quite a while now so I can learn quickly from them. I am looking forward to the challenge.

"The Nissan engine was so strong in the WEC last year that in reality there was no other powerplant to have, which brings confidence heading into the testing process. The engine produces a lot of torque with impressive reliability evidenced by the performance we enjoyed at Oak Racing in last year where we had two cars running strongly at the finish of the Le Mans 24 hours."

About Nissan North America
In North America, Nissan's operations include automotive styling, engineering, consumer and corporate financing, sales and marketing, distribution and manufacturing. Nissan is dedicated to improving the environment under the Nissan Green Program and has been recognized as an ENERGY STAR® Partner of the Year in 2010, 2011, 2012 and 2013 by the U.S Environmental Protection Agency. More information on Nissan in North America and the complete line of Nissan and Infiniti vehicles can be found online at www.NissanUSA.com and www.InfinitiUSA.com, or visit the Americas media sites NissanNews.com and InfinitiNews.com.

About Nissan
Nissan Motor Co., Ltd., Japan's second-largest automotive company, is headquartered in Yokohama, Japan, and is part of the Renault-Nissan Alliance. Operating with more than 236,000 employees globally, Nissan sold more than 4.9 million vehicles and generated revenue of 9.6 trillion yen (USD 116.16 billion) in fiscal 2012. Nissan delivers a comprehensive range of over 60 models under the Nissan and Infiniti brands. In 2010, Nissan introduced the Nissan LEAF, and continues to lead in zero-emission mobility. The LEAF, the first mass-market, pure-electric vehicle launched globally, is now the best-selling EV in history.

For more information on our products, services and commitment to sustainable mobility, visit our website at http://www.nissan-global.com/EN/.