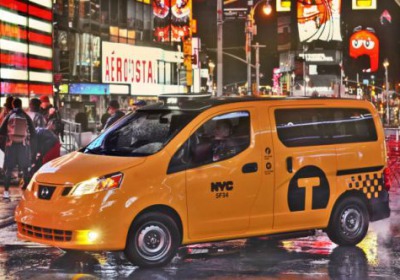 Cab drivers in New York City may not be mandated to purchase the Nissan NV200 "Taxi of Tomorrow" per the orders of a Supreme Court Judge, but that isn't stopping Nissan from beginning sales of the bright yellow people movers.

Speaking to Automotive News, Howard Koeppel, a Queens-based dealer said, "We just got them about three days ago, and we've sold five to individual operators. They're good cars." A fully loaded example of the Mexican-built taxi is priced at $29,700, and are due to officially begin service on October 28.

The NV is meant to be the go-to vehicle for NYC cabbies, mandated by the Taxi and Limousine Commission, although the process of switching over the city's 15,000 cabs has been ensnarled by legal proceedings virtually since the word "go."

The most recent drama came earlier this week, when Justice Shlomo Hagler (still love that name), judged that the city of New York overstepped itself in mandating that independent owners and companies be completely switched over to the NV within three to five years.

The city is, naturally, appealing that decision, but if they can't win by the end of the year, which is when Mayor Michael Bloomberg's term ends, the unified cab fleet will be dead in the water. The two leading candidates for New York's mayoral race have both come out in opposition to the policy, meaning that the mandate could just end up being overturned by the city's next mayor.