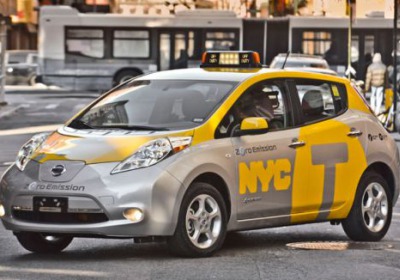 When New York City picked the Nissan NV200 as its Taxi of Tomorrow, many were surprised that the vehicle wasn't electric, or even a hybrid for that matter. With NYC Mayor Michael Bloomberg on hand, Nissan celebrated Earth Day on Monday by unveiling a pilot program of electric taxis for the city consisting of six 2013 Nissan Leaf EVs, which the mayor referred to as the "taxi of the day after tomorrow."

This pilot program is aimed to show how EVs can operate as taxi cabs, and Mayor Bloomberg said that New York City hopes to have a third of its taxi fleet electrified by 2020. In addition to the six cars, Nissan has also provided three quick chargers around Manhattan, allowing the Leafs to get an 80-percent recharge in just 30 minutes.

According to David Yassky, commissioner of the NYC Taxi and Limousine Commission, "What we have to do now is figure out how you integrate the charging of an electric vehicle into the duty of a taxi cab."

Scroll down for a press release about the pilot program as well as a video interviewing Mayor Bloomberg, Yassky and even one of the pilot drivers.

Joe Castelli, vice president, Nissan Commercial Vehicles said: "As part of our commitment to zero emission vehicles for the mass-market, Nissan is looking for ways to broaden the use of electric cars, including commercial applications like taxis. Following the selection of Nissan NV200 as New York City's Taxi of Tomorrow, our relationship with the city provides us the ultimate proving ground to conduct this LEAF taxi pilot to help optimize the use of electric vehicle technology for future applications."

Mayor Michael Bloomberg said: "Even though the Taxi of Tomorrow won't be on the road for another six months, we're already looking ahead to the taxi of the day after tomorrow. Nissan's proven track record with electric vehicles will put us ahead of the curve in helping us answer important questions about incorporating electric taxis into the fleet so that we can achieve the goal of a one-third electric taxi fleet by 2020."

As part of the pilot, Nissan and partners in New York City will also install several CHAdeMO-based DC quick chargers, which will enable drivers to re-charge their electric taxis quickly during their shift. With quick charging, Nissan LEAF can be recharged to about 80 percent in under 30 minutes.

About Nissan North America
In North America, Nissan's operations include automotive styling, engineering, consumer and corporate financing, sales and marketing, distribution and manufacturing. Nissan is dedicated to improving the environment under the Nissan Green Program and has been recognized as an ENERGY STAR® Partner of the Year in 2010, 2011 and 2012 by the U.S. Environmental Protection Agency. More information on Nissan in North America and the complete line of Nissan and Infiniti vehicles can be found online at www.NissanUSA.com and www.InfinitiUSA.com or visit the Americas media sites NissanNews.com and InfinitiNews.com.

About Nissan
Nissan Motor Co., Ltd., Japan's second-largest automotive company, is headquartered in Yokohama, Japan, and is part of the Renault-Nissan Alliance. Operating with more than 248,000 employees globally, Nissan provided customers with more than 4.9 million vehicles in 2012, generating revenue of 9.4 trillion yen ($US 118.95 billion) in fiscal 2011. With a strong commitment to developing exciting and innovative products for all, Nissan delivers a comprehensive range of 64 models under the Nissan and Infiniti brands. A pioneer in zero-emission mobility, Nissan made history with the introduction of the Nissan LEAF, the first affordable, mass-market, pure-electric vehicle and winner of numerous international accolades, including the prestigious 2011-2012 Car of the Year Japan and 2011 World Car of the Year awards. For more information on our products, services and commitment to sustainable mobility, visit our website at http://www.nissan-global.com/EN/.