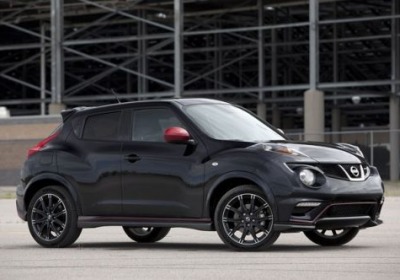 With the LA Auto Show a little more than a month away, we're getting a good idea of which cars we'll be seeing there. Show organizers have issued a press release that names numerous debuts we've heard about already, and one that caught our eye as brand new: the Nissan Juke Nismo RS.

We first heard about the Juke Nismo RS last year, and reported news of track-focused handling upgrades as well as a boost in power to the tune of 270 horsepower – an increase of 73 hp over a standard Juke. There is still no definitive word as to what else the will come with the Nismo RS package.

In addition to the Juke, we hear that the Nismo brand will also help unveil a new concept vehicle for Nissan on the LA stage.

There will be no shortage of news coming from LA, but it seems like luxury automakers will be playing a huge role. Mercedes-Benz is confirmed to have global debuts of four vehicles while Porsche will have three (including the Macan crossover); BMW and Audi will each have five North American debuts. Catch all this and more with our live show coverage starting November 19.

LOS ANGELES (October 9, 2013) – The Los Angeles Auto Show confirmed today that it will host 22 world debuts during its Press Days, making for a total of 56 vehicle debuts overall, to be unveiled in front of a global audience, November 19, 20 and 21, 2013. November 19 will focus specifically on technology announcements held in the Connected Car Expo area of the Los Angeles Convention Center.

World debuts include the NISMO JUKE RS and a NISMO Concept vehicle from Nissan, as well as four models from Mercedes-Benz, which will be unveiled alongside the brand's North American introductions of the GLA 250 and the S63. Porsche has added two new world debuts to its lineup, in addition to the previously announced Macan, the manufacturer's highly anticipated SUV crossover vehicle. BMW, Chevrolet, Ford Honda, Hyundai, Jaguar, Land Rover, MINI, Subaru and Toyota round out the list, all with global introductions planned for the show.

In addition to the roster of global premieres, a variety of North American debuts will be unveiled in Los Angeles, including the 4 Series Coupe, i8, i3, 5 Series Sedan and 5 Series Gran Turismo from BMW. U.S. auto show introductions will also include the Jaguar C-X17, Cadillac Escalade, a high performance model from Nissan, three vehicles from Volkswagen, including the e-Golf and five from Audi, among others.

Press Days' attendees will have the opportunity to see vehicle concept debuts on the show floor as well, including 12 planned concept cars from Jaguar, Mercedes-Benz, Subaru, Volkswagen and Volvo, as well as the Cadillac Elmiraj concept.

"As one of the world's largest media hubs and car buying markets, Los Angeles offers a unique combination of press exposure and valuable consumer contact," said LA Auto Show President, Lisa Kaz. "The LA Auto Show's consistent growth and commitment to remaining on the forefront of automotive technology, green innovation and automotive design will certainly be noticed with 2013's roster of major debuts."

About the Los Angeles Auto Show and Connected Car Expo

Founded in 1907, the Los Angeles Auto Show is the first major North American auto show of the season each year. Press Days for the 2013 LA Auto Show® will be held on Nov. 20 and 21. The show will be open to the public Nov. 22 – Dec. 1. The Connected Car Expo (CCE) will be the first expo to unite automotive and technology professionals in an effort to increase development and foster relationship-building in the connected car industry, providing attendees with access to the key players and top media constructing the future of the connected car. CCE will debut on Nov. 19, and continue in conjunction with the 2013 LA Auto Show Press Days. The LA Auto Show is endorsed by the Greater L.A. New Car Dealer Association and is operated by ANSA Productions. To receive the latest show news and information, follow LA Auto Show on Twitter at twitter.com/LAAutoShow or via Facebook at facebook.com/LosAngelesAutoShow and sign up for alerts at www.LAAutoShow.com. For more information on CCE please visit http://connectedcarexpo.com/